It is easy to fool yourself with Extreme Spread, and it’s even easier to fool others.
END_OF_DOCUMENT_TOKEN_TO_BE_REPLACED

Following some review of the recent Buckmark accuracy test, some readers wondered if the suppressor was hurting precision. Others, noting that Buckmark barrels are well known for their accuracy, wondered how the stock 5.5″ barrel would fare. 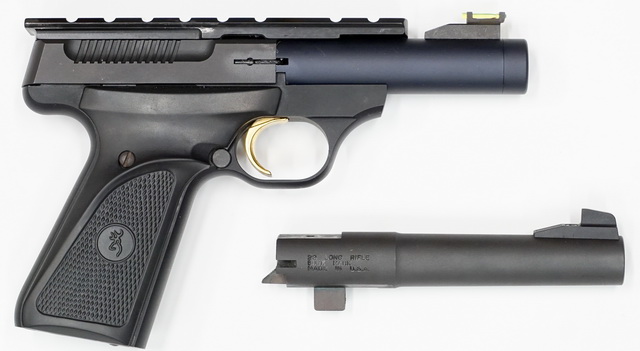 I ran the standard barrel through the same procedure as before. The aggregated data and analysis are in this Excel workbook, and the summary results with links to the 50-yard targets are here:

This pistol shot everything well. In fact, the best four loads tested would all be expected to hit inside a Bullseye 10-ring virtually 100% of the time.

Running the Tactical Solutions barrel without the suppressor seemed likely to help its score also, at least with some loads. At 4″, it gives up 40-50fps vs. even the 5.5″ barrel. But the accuracy of CCI SV went from CEP of 2.0 MOA to 1.3 MOA. Groups of Eley Club (essentially the same performance as Eley Target) showed CEP under 1.4 MOA. However, it was not able to tighten performance of the Gemtech load. (Detailed data were added to the spreadsheet from the previous test.)

How accurate is a typical rimfire pistol? Out of curiosity I mounted my Buckmark, with its 4″ Tactical Solutions barrel and 5″ AAC Element II suppressor, on my test stand and recorded shots simultaneously at 25 and 50 yards. 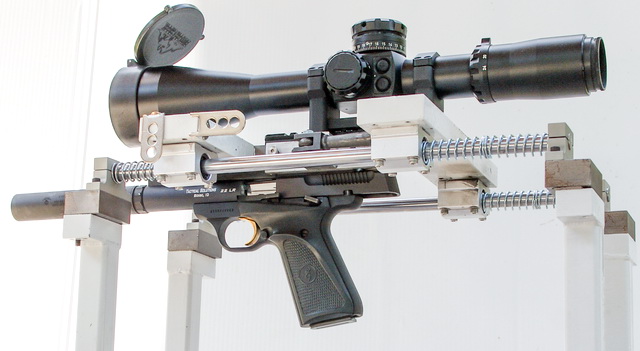 As usual, I digitized the paper targets using OnTarget TDS, and followed the statistical analysis outlined at ballisticaccuracy.com. The aggregated data and analysis are in this Excel workbook.

I was surprised at how much more dispersion this gun shows than the 10/22 rifles I have tested. It’s certainly nothing to brag about: The 10-ring on NRA Bullseye Pistol targets (shot competitively with autoloading rimfire pistols) typically has a radius of 3MOA, and even with zero shooter error the good ammo here would only hit that 80% of the time. 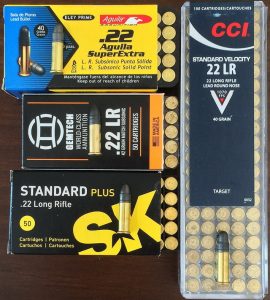 I haven’t been able to find any decisive reviews of Gemtech’s 42gr .22LR subsonic ammunition. I finally picked some up under $4/box and decided to wring it through my Feddersen-barreled 10/22.

Since my last precision testing of 10/22 rifles, I have also refined a testing process capable of higher sample volumes, so I decided to compare the Gemtech to these other subsonic flavors presently abundant in my stockpile. (Of course, since Gemtech’s ammo is supposedly optimized for use with a suppressor, this test was conducted with an AAC Element II screwed to the muzzle of the 16″ Feddersen match barrel.)

One thing that has made precision testing much easier is this universal machine rest I developed: After every shot it returns the gun to the exact same position (which can be confirmed by the 32x scope on top), so it’s easy to shoot a string quickly and with zero shooter error.

I’ve also become a little more disciplined with respect to fouling the barrel: When shooting a clean barrel, or changing ammunition types on a fouled barrel, I ignore the first five shots. Different rimfire ammo uses different lubricants, and it takes some number of shots before the bore is consistently coated in the new lubricant. Five shots isn’t really adequate to fully stabilize the bore. (A good bolt action rifle will show that ten or twenty shots are required for it to settle in.) But at the level of precision one can get out of an autoloading rimfire, five shots seems “good enough.”

At 50 yards (the test distance shot here), muzzle velocity variance doesn’t really come into play. But it certainly does at 100 yards and beyond. It was easy to prop a chronograph in front of the machine rest and record the velocity of every round fired during the testing.

Another thing that helped streamline analysis was OnTarget’s TDS software. It can’t (yet) auto-detect multiple shots on a single target, but it does auto-detect the points of aim, and it makes marking the shots and groups fast and easy.

I took advantage of the latest statistical tools available from ballisticaccuracy.com. The aggregated data and analysis are in this Excel workbook.

Summary results, here linked to TDS-marked targets, show that (in this gun) Gemtech’s ammunition is better than Aguila but worse than CCI SV:

These are both Ruger 10/22 style semi-automatic rifles built for shooting .22LR with maximum accuracy. On top is an $860 rifle built entirely by KIDD Innovative Design. The receiver and trigger are milled from aluminum, and the bolt from hardened steel. The single-stage trigger is also a crisply machined assembly that adjusts down to a pull of just 1.5 pounds. The lightweight barrel is guaranteed to group inside of half an inch at 50 yards. The gun here is screwed into a comfortable $100 ProMag Archangel Target stock

I tested these for precision last year. This time, with a few more ammo types, I also tested all ammo both with and without a suppressor.

Both guns were cleaned and then shot through the following sequence of 40gr subsonic target loads:

All rounds were fed from the same transparent Ruger 10-round box magazine. This time the KIDD ran with no hiccups whatsoever. The Feddersen-barreled Ruger, shot second, had one failure to feed with the CCI and one with the Aguila.

The raw data and calculations can be downloaded here. The targets are shown at the end of this post. Summary analysis: 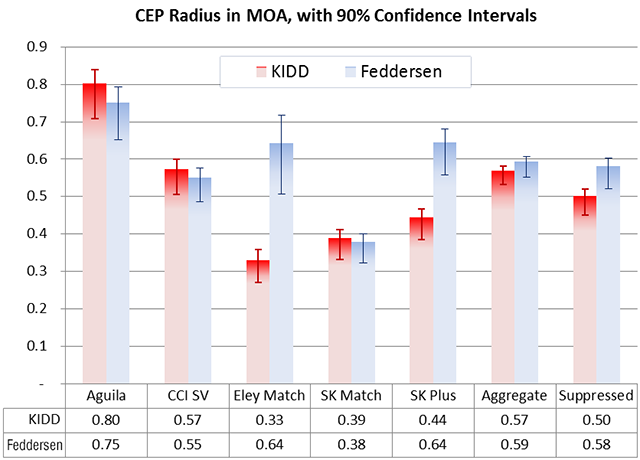 END_OF_DOCUMENT_TOKEN_TO_BE_REPLACED

A precision-obsessed friend was lamenting the apparent inability of his Robinson XCR to shoot tight groups. Although it was not designed specifically for precision, I am a fan of the gun’s design. Particularly given its ease of changing barrels, I began to wonder how much we could improve on the standard chrome-lined light-contour barrels. So I sent two Lothar-Walther match-grade 1:8 rifled stainless steel blanks to Robinson and waited (seven months) for them to return as heavy-contour 11″ 5.56mm XCR barrels.

This is not a gun that is easy to shoot precisely: It is light, and its single-stage trigger breaks at over 4 pounds, which I know robs me of accuracy. In order to remove shooter dispersion from the equation I tested various configurations in a custom machine rest. I ran a range of ammunition through two standard 11″ barrels and, sure enough, 10-round groups would typically exhibit a mean radius in the vicinity of 1.5MOA. The standard 16″ light barrel, interestingly, printed 10-round groups with MR just above 1.0MOA shooting light bullets (both XM-193 and Wolf Classic!), but didn’t do as well with heavier bullets in match-grade loads (despite its 1:9 twist).

With the new precision barrels the rifle prints 10-round groups with mean radius consistently below 1.0MOA, like these: 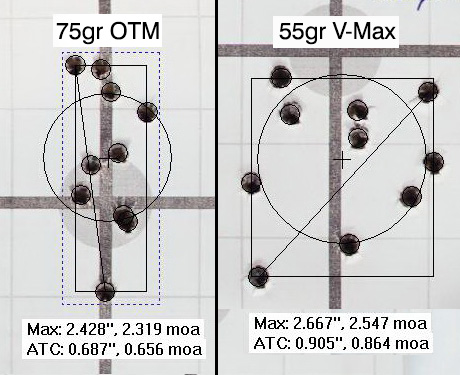 There is some vertical stringing evident, which varies with the upper, and which suggests there is further room to tighten the design. And, as mentioned above, these groups were achieved with a machine rest. When I shoot off of bags 10-round groups open up by roughly another 0.5MOA. Suffice it to say that with a good barrel and shooter this gun is capable of respectable accuracy.

We’ve been questioning what sort of precision we can expect from a piston-driven rifle with a chrome-lined bore. Those are both features believed to reduce accuracy (vs direct-impingement and an unchromed bore). We tested our Ruger SR-556 shooting ten-round groups using the same suite of ammo as in our Savage .223 Precision test and got CEP across the board about 1 MOA (with the exception of the bottom-of-the-barrel Wolf Classic, which produced CEP of 1.5 MOA).

This weekend we got a chance to try a little harder with a Barrett REC7, a premium rifle. Shown above, we fitted it for this test with an LRA bipod and NightForce F1 scope. Five shooters took 10 shots each with two different types of ammo. Given the conditions the shooter variation was minimal. The ammo makes the difference, and this gun sets a new precision benchmark for its type: 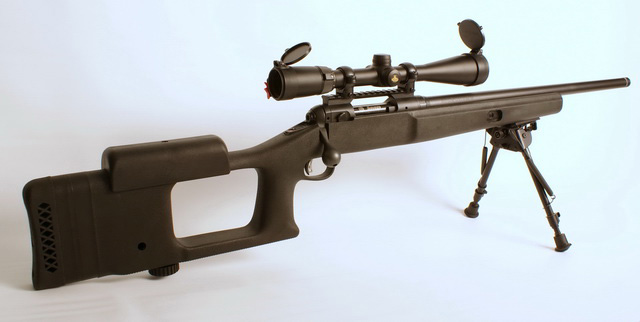 Continuing precision testing my guns I took my old Savage 10FP to the range with boxes of six different commercially-available .223 Remington rounds. The rifle has a 24-inch 1:9 heavy barrel installed in a Choate Ultimate Varmint Stock, which makes it a superb bench gun. I mounted the 14x Nikon scope before I had found good Quick-Detach mounts, and before I had concluded 20x is my preferred minimum for precision shooting. But it’s still fine for setting a baseline with commercial ammo:

The 100-yard target can be reviewed here.

I had so much fun testing my 10/22s for precision that I decided to run analysis on my .308 Savage 10FP. This has been my benchmark medium rifle for almost a decade now, and has been abused accordingly: I have broken the bolt handle at least once and had to hammer out and even drill out stuck cases. How accurate is it now?

I shot the following two groups of Hornady 168gr OTM handloads at 100 yards. I only had 8 rounds of the first load, which uses Federal GMM cases with 44.4gr Varget. The second group is 10 shots from LC 04 cases with 44.7gr Varget. (This batch of Lake City brass has .2gr more water capacity than the Federal. The LC loads chronograph about 2850fps vs 2840fps for the FC loads. Keep in mind this is a 26″ barrel.) All loads are seated to 2.80″ and use FGM210M primers. 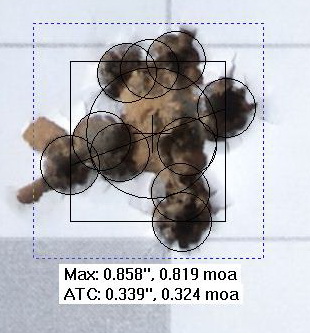 I have plenty of the Aguila on hand, so I used that for sighting and shot two groups with that. The Ruger/Feddersen fired all 50+ shots without any hiccups. The KIDD began to bog down at the end, experiencing a few failures to fire or extract on the Aguila. Cleaning the chamber and bolt face and testing some more showed it’s capable of running smoothly when clean, but evidently it doesn’t like too much of the copious .22LR fouling to build up. Do those tighter tolerances translate to higher precision?
END_OF_DOCUMENT_TOKEN_TO_BE_REPLACED