It is easy to fool yourself with Extreme Spread, and it’s even easier to fool others.

First, note that even the most precise rail gun will occasionally print a “flier.” If 99 out of 100 shots nestle into a dime group, but one breaks away by an inch, would you characterize the accuracy of that gun as shooting one-inch groups? Now pick up a rifle, pop in a 100-round beta mag, close your eyes, and empty it from the hip. There’s a decent chance that some 3 of those shots will be touching at 100 yards. But does that tell you anything about the precision of the rifle? The answer to both questions is “of course not.” And it gets worse: Why not crop one of those cloverleaf shot-from-the-hip groups and share it online. Then tell everyone your rifle shoots like that “all day long.” Well not you, of course.

You probably want to test your mettle and your gun’s metal and really figure out how precisely you can shoot. Maybe your manufacturer gave you a “1-MOA guarantee,” by which they (typically) mean that your gun will shoot a 3-shot group into 1” at 100 yards with quality ammo. So you hit the range, tighten your scope, and fire three shots at the same point. Bingo: You don’t need calipers to see that they’re within an inch of each other. You’ve really got a sub-MOA rifle!

Well you’ve got a full box of ammo, so why not knock the center out of that pretty little group? You take another shot and, damnit, it goes wide. (You’ll have to crop that group pretty tightly to show it off now!) But everyone knows you can call fliers, so you take a breath and try some more. Before you’re through with the box you will probably notice something unfortunate:

The more shots you take, the wider your group tends to get.
Here’s a real-world target showing 20 shots at the same point of aim: 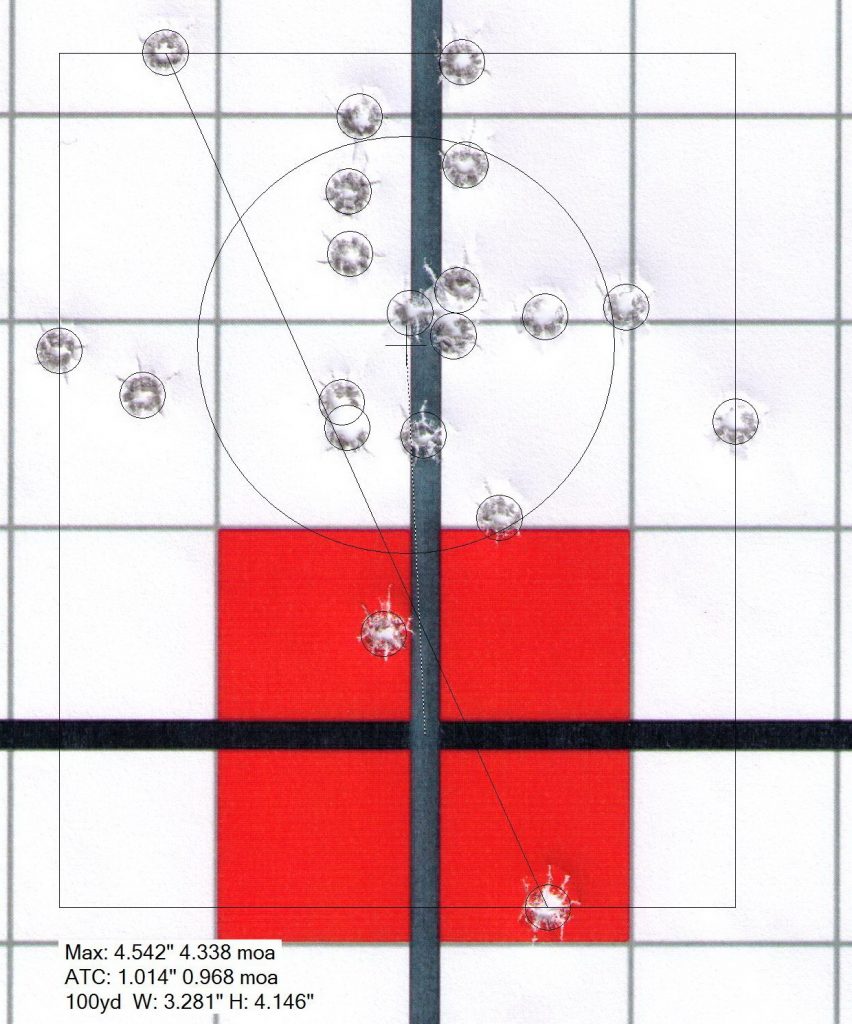 Now something doesn’t add up here. The manufacturer guaranteed your rifle would shoot three shots within 1 MOA. But neither they, nor you, nor your gun could predict which order the shots in that group would appear. If your gun is really sub-MOA you should be able to pick any three at random as your “group” and it should measure under 1 MOA. You’ve just discovered one of the industry’s inside jokes: Accuracy guarantees expressed in terms of finite shots are either impossible or meaningless.*

You’ve also discovered one of the problems with the Extreme Spread: It all depends on the number of shots you take. Worse yet, it doesn’t differentiate between a target where most of the shots are in a tight group and there’s a lone “flier,” and one with the same Extreme Spread but with every shot scattered about the same distance from the center.

If you kept your sight zeroed and logged every shot taken with a given rifle and lot of ammunition, after 1000 shots your aggregated target would look something like this: 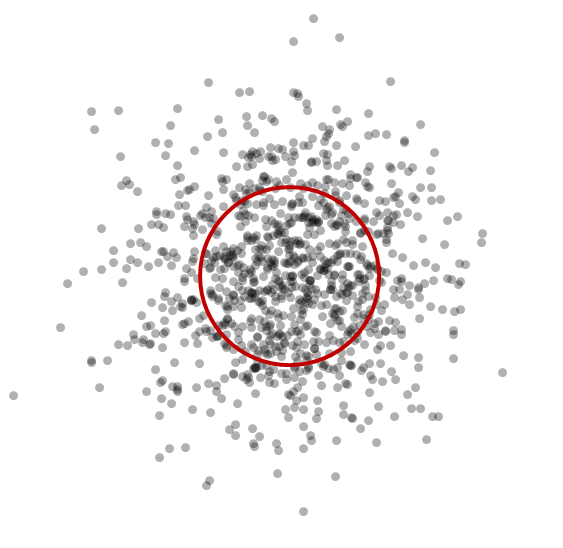 (Here the dots represent the center of each hit, not the size of the holes cut by the bullet.) We’ll call this picture a sample “distribution” of shots. It doesn’t matter how accurate or inaccurate your gun: the mathematical distribution of its shots is the same as the one that produced this sample. The only thing that varies with accuracy is how large or small this cluster is. The red circle is drawn around the center of the distribution and contains exactly half of the shots in the picture. The radius of that red circle is called the Circular Error Probable (CEP), and that single value is sufficient to characterize the accuracy of a gun. Some real-world CEP values:

(Note that all of these specifications are given with the angular measure MOA, or Minute Of Arc, which is equal to about 1.05” at 100 yards. By using an angular measure we don’t need to specify the distance of a particular target or test.) For example, the XM193 specification means that ammunition should put at least half its shots inside a 1.5” diameter circle at 100 yards.

A useful “accuracy guarantee” would read something like these military performance standards, which one way or another boil down to the following: “CEP will be no greater than a certain value.” Traditionally CEP is given for the 50% (median) level, but it can also be given for other probability levels. For example, a manufacturer might instead say that their gun should put 90% of its shots inside a 1-MOA circle.

We are focusing on circles, but if you’ve shot a lot of real-world groups you might be more used to finding ellipses. There are a few things that can cause your shots to string out vertically, like barrel heating, or larger variations in muzzle velocity. Wind can cause your shots to string out horizontally. But removing those factors your gun will shoot into a circular distribution like the one shown above.

What does this mean for accuracy? You don’t get to pick the order in which those shots are fired. Any individual shot is essentially selected at random from that distribution of shots. This has substantial implications for people who try to deduce their accuracy from small samples.

Just as importantly, especially for sighting in: on average the 3-shot center is 60% of the CEP away from the true center! It’s theoretically impossible to be certain you’ve found the exact center of impact, but you can see that three shots aren’t a very good indication. In fact, to double the precision of your sight zero you have to take 10 shots! (At that point we expect the sample center to be within 30% CEP of the true center.)

So what’s a shooter to do? For one thing: discount 3-shot groups. If you want to get a sense of a gun’s precision then shoot larger groups. I tend to shoot 10-round groups and use computerized target markers to precisely calculate my CEP. For the most accurate guns at closer distances that tend to create jagged holes I instead shoot several 5-round groups.

If you’re not going to bother calculating CEP and just want to stick with Extreme Spread because it’s so easy to measure, at least move up to 5-round groups. They are statistically more efficient and less prone to abuse than 3-round groups. Use multiple groups, and don’t throw away the bad ones. For example, the American Rifleman magazine’s protocol of taking the average extreme spread of five 5-round groups is decent.

For more on the theory and practice behind measuring shooting precision visit ballistipedia.com.

1I’ve actually made two accuracy returns in my life. One was to a manufacturer with no explicit accuracy guarantee, who nonetheless test-fired the gun, got decent results with one type of ammo I hadn’t tried, and returned it with that explanation and sample targets. In another case the manufacturer eventually agreed the barrel was bad and sent me a new one.