Before You Touch a Gun

By now you should have digested the rules and details of gun safety. However, before you touch a gun you still need to know:

You should not handle a gun until you are certain how to answer these three questions. And the first thing you do upon handling a gun should be to check all three conditions. Even among friends you never assume. If you clear a gun and hand it to your friend, he should also clear it. If you take it back you should once again confirm whether it is clear and safe.

Before you fire a gun you need to know a few more things. If your gun and ammo have been provided by a trusted and knowledgeable person these are traditionally taken on faith:

When You First Touch a Gun

Your goal in shooting a gun is to send a bullet out the muzzle on a path to hit exactly what you intend. The means of accomplishing this goal are simple:

Presentation of a gun from a carry position should be practiced separately from firing, and should not be attempted with a loaded gun until an instructor can confirm you are doing it safely. The goal is to make presentations as direct as possible. Things to watch:

One other instinctive behavior to avoid, even during casual target practice, is pointing the muzzle above the target and then settling down on it. This means that your muzzle is being pointed in an unsafe direction — above the target and backstop. Likewise, the gun and muzzle should never be above your eyes: in a defensive scenario this unnecessarily obstructs your visual awareness and ability to continue assessing the threat.

Note that sight alignment only guarantees you’ll hit a target if the gun has been “sighted in.” If the gun does not shoot to its point of aim then either the shooter or the sights need to adjust for that. The process of accurizing and sighting in a gun can get rather complicated. Here we will assume that the gun is both accurate and sighted in.

We will also not delve into the subject of long-range shooting, where one must worry about adjusting sights for different target distances, wind conditions, or ammunition loads.

The particulars of sight alignment depend on the sighting system being used. One general recommendation is to keep both eyes open whenever possible. With point-shooting this is essential, and more generally it is beneficial because closing an eye takes some effort and can actually shut down some of the visual cortex’s helpful functions. However, if you find you are having trouble acquiring a sight picture with both eyes open it is acceptable to close one eye, especially with aperture or scope sights. 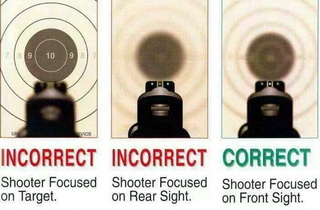 Red dot sights allow the shooter to focus on the target. The gun will put a hole wherever the dot is. (2017 Update: Evidently some common brand-name red-dot sights suffer from extreme and unexpected parallax. Check yours and know its limits before using it!)

If a laser sight is bright enough and your grip sure enough that it appears clearly on the target, then all focus is on the target. Note that many lasers are offset from the bore, in which case they should be zeroed parallel to the bore. The point of impact will be offset accordingly, so if bullseye shots are required the shooter has to account for that offset when aligning the laser with the target.

After a scope is sighted in each shooter needs to ensure that its focus matches his eyesight. If everyone is shooting with corrected vision then the same focus will work. Otherwise the ocular focus needs to be dialed so that the scope reticle appears clearly in the same plane as the scope image.

At that point the shooter merely centers the target in the reticle.

Point-shooting means that the shooter looks at the target, not the gun. When time is more essential than accuracy — e.g., at very close and imminent threats — you may have to pull the trigger without a sight picture. Practiced shooters can reliably hit man-sized targets out to ten yards without using sights. Trick shooters can pull off remarkable feats of accuracy without using sights.

Point-shooting is also the primary method of sighting shotguns to hit flying targets.

Trigger control refers to pulling the trigger without disrupting the sight alignment, and following through to make subsequent shots as efficient and accurate as possible.

Once you have the gun aligned on the target just pull the trigger without moving the gun. Sounds straightforward, but it is actually extremely difficult, even before adding in the effects of recoil. That’s why trigger training begins with an unloaded gun, and from there moves to loaded guns with negligible recoil. What follows is an eight-step process to pull a trigger. Again, it doesn’t have to be this complicated, but these details address most errors that people commit during the process:

Follow through cannot be overemphasized: If you release the trigger before you’re back on target, or if you release it past its reset point, then you are not following through!

The first line of defense against recoil forces is to minimize how much they move the gun. This is done by optimizing the shooter’s grip on the gun.

Start by ensuring your grip is as high as possible on the gun. The higher you can get your grip the less muzzle flip you will experience. Almost all autoloaders have at least an indentation just below the slide, and many have pronounced “beaver tails.” Those features are there to encourage you to get a high hold without getting “bitten” by the slide, so push the web of your primary hand snugly up into that recess.

Now find a consistent and comfortable grip for your support hand. Again, the higher, the better. “Teacup” holds do not help with recoil. Look at how champion shooters hold their guns: It’s like they’re trying to swallow the slide with their hands. (You do need to be aware of where the controls are on an autoloader, since a high grip tends to put your thumbs on top of the slide catches, and it can be confusing if you inadvertently trip those when the slide locks back on an empty magazine.)

The key to fighting recoil with both hands is to ensure that there is minimal slack and maximum contact in your grip. (This actually tends to be more of a problem for people with big hands on small grips since they have to cup their hands to keep fingers off the slide.) Carefully inspect your standard firing grip with your finger on the trigger: Are you cupping your hands at all? Is there any space between the grips and your firing or support hand? If so this space can allow the gun to “get a running start” under recoil, and that always results in more perceived recoil.

Note that none of these suggestions involve tightening your grip on the gun, which tends to be counterproductive. Rather, their objective is to transfer as much of the shot’s recoil as directly as possible to your larger muscles and body mass, where it can be absorbed with less drama. If you feel that you need to tighten your grip in order to control the gun do so by pushing with the palm of your primary hand and pulling back with your support hand. This will tighten your hold on the gun but leave your trigger muscles free to do their delicate work without disrupting the point of aim.

Every shooter has to fight the instinct to anticipate recoil during their trigger pull. With handguns it is natural to drop the muzzle as you break the shot in anticipation of muzzle flip. But this must be avoided at all costs! The best way to ensure this isn’t affecting your accuracy is to do live fire drills with random dummy ammo. With revolvers you can put empties in some of the chambers and spin the cylinder before closing it. With autoloaders you can either load dummies at random into the magazines, or have a partner take the gun between each shot and clear the chamber at random. When you break the trigger on a dummy round or empty chamber you should see absolutely no movement! The trigger should be held to the rear, you should not have blinked, and your sight picture should be undisturbed. If you move then keep doing these drills, or step down to a gun with lower recoil until you can break the anticipation habit.

If you are shooting tight groups but they are off center, and a laser boresighter or better shooter confirms your gun is sighted in, the Pistol Correction Chart is helpful for diagnosing consistent errors in accuracy.

However if shot dispersion is high then you need to go back to fundamentals: practice precise sight alignment, focus on the front sight, and a consistent trigger squeeze with follow-through.

There are four steps to the tactical application of gunfire. For practice I find it helpful to associate a verbal command with each step, which the shooter should call out to confirm he is following the process:

On subsequent iterations of this cycle the assessment step includes asking:

“Clear.” Once all known threats have been stopped release the trigger and send the trigger finger home. Do an after-action assessment: Break focus on the target by forcing your head to turn left and right, then scan for other threats. Move to cover if available; reload if possible. If you are done with your gun carefully and deliberately holster it. “All Clear.”

Start with sight picture and sight alignment. On small guns with notch-and-post sights the short sight radius means that you have to be very precise with sight alignment. Don’t tolerate a hair of difference between the vertical alignment of the front and rear sight, or on either side of the front dot. And when you go to break the shot you can’t let the sights move at all. This is something you should do a lot of dry practice with:

All of the above should be practiced until they can be done quickly and subconsciously.

The only thing you can’t easily dry practice on most guns is the trigger reset. Therefore, once you’re burning real ammo pay attention to this: after a conscious follow-through (i.e., holding the trigger to the rear for a few seconds and not dropping the gun or sight picture) slowly release the trigger only to the reset point.

The other thing you have to watch for during live fire practice is that you don’t develop any adverse reactions to recoil. If you don’t realize the gun is empty and you squeeze the trigger for another shot be sure nothing moves. If it does then stop all other practice until you have run random dummy drills to the point of eliminating any flinch or anticipation. Besides verifying that you have no recoil-induced behaviors random dummy drills are also a good opportunity to practice clearing malfunctions.