Concealment Gun: Smith & Wesson 642 with Crimson Trace (laser sight) grips.  If you only buy one gun for defense, this simple and easily-concealed revolver is it.  The laser sight compensates for the tiny sight radius, enhances dry-fire practice (which is important with a rough double-action only revolver trigger), enhances the deterrent value of the gun, makes it equally useful in all light conditions, and allows you to focus on a threat instead of on the front sight (as is necessary to make good hits with a conventional notch-and-post sight).

Since I bought and tested one in 2018, a Remington R51 (also with a laser sight) has taken the place of the S&W 642 as my preferred carry gun, simply because it’s a little less bulgy in a pocket holster.

Tactical Handgun: You can carry a lot more firepower with a magazine-fed gun, but you also need more training and practice to reliably use its more complicated action, which is prone to both operator-induced and mechanical malfunctions.

Fit is the first criterion for a handgun.  If it fits your hands get a Glock.  Otherwise find a quality gun that does fit you well and that shoots either 9mm or .357 SIG. (380 ACP is considered barely adequate for self-defense. Larger calibers are more expensive and difficult to shoot but do not appear to offer significant defensive benefits.)

Although I prefer striker-fired semi-autos I have also been impressed with high-quality double-action/single-action handguns like those by Sig-Sauer. A double-action on a semi-automatic may be seen as an unnecessary complication because the first trigger pull is longer and harder than follow-ups, and because it needs to be de-cocked after firing. But there are tactical benefits to the fast, light follow-up trigger pulls, and you may prefer that feature.

I am opposed in principle to handguns with manual safeties because those are unnecessarily complicated.  This rules out the popular 1911 design, but given the wide range of more modern drop-safe designs that omit manual safeties I think it’s a good rule.  (And no, manual safeties do not make handguns safer.  Any handgun should be expected to discharge when its trigger is pulled.  Holsters, gun safes, and obedience to the rules of safe gun handling keep a gun’s trigger from being pulled unintentionally.)

Final point: If you aren’t equipping the gun with a laser sight then spend the extra $100 for tritium-illuminated “night sights.”  Handguns are virtually useless in the dark when you can’t see the sights well enough to align them.

Of course, the only reason to carry a handgun is to fight your way to a long gun, so we continue:

For home defense get a pump-action shotgun, ideally a 12-gauge (because bigger is better when it comes to stopping an imminent threat!).  You can’t go wrong with a Mossberg 500-series or Remington 8xx.  Load it with buckshot.

Ruger SR-556. I recommend the AR-15 platform because it is the standard American militia rifle — not only does everyone know how to operate and maintain it, but it also enjoys a vibrant and competitive market for parts and upgrades. However, since I abhor the dirty direct-gas impingement action of standard AR-15s I recommend the SR-556 for its elegant piston-driven action. Actually, I’ve come around on the piston-vs-DI question. Today I’d probably buy a POF Renegade Plus.

Precision Rifle: Savage 10FP (available in both .223 and .308).  In spite of its stand-offish customer service (which still doesn’t use Email!), Savage has made the most consistently accurate factory rifles at reasonable prices for many years.  This is thanks to a number of innovations (which are slowly trickling out to other manufacturers) that obviate the need for expensive custom finishing to achieve peak accuracy, including:

The 10FP series is ostensibly designed for police snipers, so it is available in some very nice tactical packages.  There is also a good range of third-party stocks available for it.  I am partial to the relatively inexpensive Choate Ultimate Varmint Stock shown here. 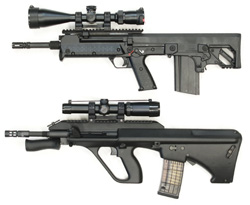 Personal Defense Weapon: Since a handgun is a stopgap weapon, but standard rifles and shotguns are unwieldy, you might want to carry a compact magazine-fed firearm that shoots a rifle round.  One of my favorite designs is the Steyr AUG, a bullpup carbine with a 16″ barrel that measures only 28″ overall. MSAR’s STG-556 is a clone with a number of improvements — most notably in terms of price. Kel-Tec’s RFB equally-compact bullpup steps up to the more powerful .308 cartridge. 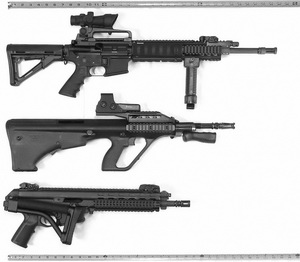 SCAR-style tactical rifles are also good candidates for this role: Unlike AR-15s they allow for folding stocks by putting the return spring over the piston rod. The Robinson Armament XCR is my recommended buy in this category.

For even greater concealability pistols can be employed with slings and extended magazines to bridge the gap. An AR-15 pistol in .300BLK is a good crossover PDW.

Bullpups: I am a fan of bullpup rifle designs, which put the bolt and magazine in the stock behind the trigger guard, resulting in more compact and balanced guns. Reviews in this genre include: