I have plenty of the Aguila on hand, so I used that for sighting and shot two groups with that. The Ruger/Feddersen fired all 50+ shots without any hiccups. The KIDD began to bog down at the end, experiencing a few failures to fire or extract on the Aguila. Cleaning the chamber and bolt face and testing some more showed it’s capable of running smoothly when clean, but evidently it doesn’t like too much of the copious .22LR fouling to build up. Do those tighter tolerances translate to higher precision?

The question of precision is a mathematically interesting one that has been embarrassingly neglected by the shooting industry, which is often content to simply measure the extreme spread of 3 to 5 shots and leave it at that. With 10 shots per group I have more statistically significant samples. I use OnTarget software to digitize the targets. It automatically calculates the sample radius and spread for each group. But those measures vary with the number of shots per group. As explained on Ballistipedia, when we test and compare precision we should use invariant and unbiased statistics like Circular Error Probable (CEP), which is the radius of a circle that we expect to cover exactly half the shots — no matter how many we fire. Daniel Wollschläger, a statistically savvy developer, has built an exceptional open-source web app based on R that takes the output of OnTarget and performs the difficult calculations to provide unbiased estimates of CEP (and many other statistics).

Having efficiently digested the shooting data, we are ready to compare the results, which are presented in the standardized units Minutes of Arc (MOA), and for which I have added the 90% confidence intervals: 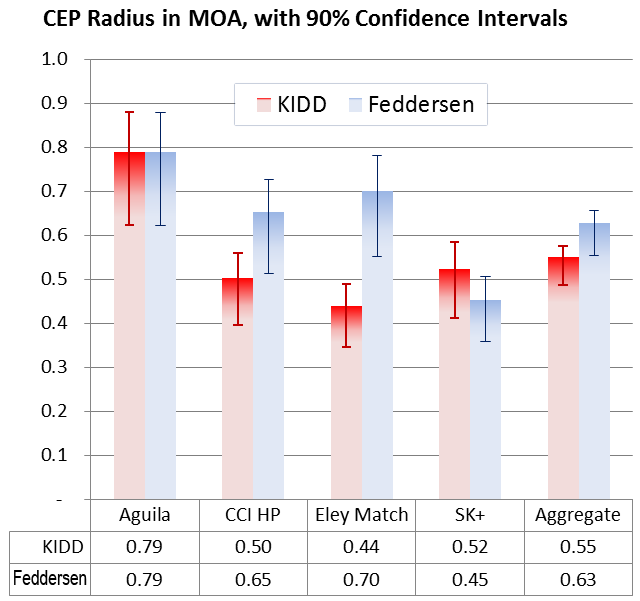 These statistics show that the KIDD rifle seems more accurate on only half of the four lots tested. The 90% confidence intervals overlap on all measures except the Eley Match, which means that if we kept on shooting the other ammunition we would expect the Feddersen to match accuracy with the KIDD up to 90% of the time. After factoring in its lower cost and higher reliability I think Feddersen’s barrel is quite commendable.

Here are some other ways of looking at these statistics. In the long run we would expect the KIDD rifle to land 96% of its shots within a 1″ circle at 50 yards, using all but the Aguila ammunition. However the Feddersen rifle only achieves this level of precision using SK+. (This 96% hit region is becoming known as “4MR,” since it is equal to 4 times the expected mean radius.)

What happens if we put that remarkable Feddersen barrel on the precision KIDD receiver? I tried this and spent months trying to get it to cycle reliably. I sent it to Fred Feddersen and he blamed the KIDD springs. I sent it to Tony Kidd and he said the Feddersen barrel didn’t have a proper shoulder. The moral of that test: Don’t expect precision 10/22 components from different companies to play nicely together.

For reference, following are the actual 50-yard targets fired for this test overlaid with OnTarget analysis. “Max” is also know as extreme spread, and “ATC” is Average To Center, a.k.a. sample mean radius: