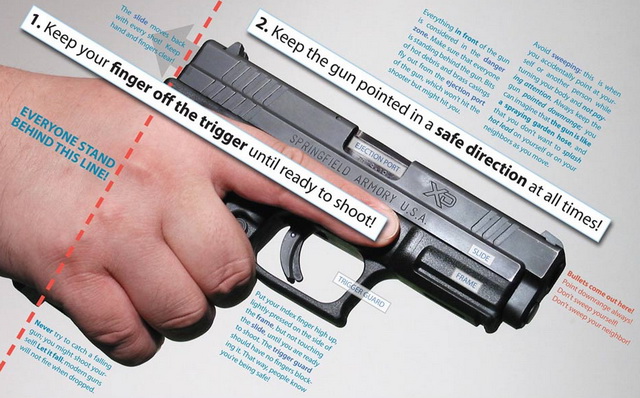 The Rules of Gun Safety

These are the two failsafes. No accidental shooting occurs without both of these rules having been broken. (A common corollary to these rules is always assume a gun is loaded.)

A safe direction means that the gun is pointed so that even if it were to discharge it would not cause injury or damage. The key to this rule is to control where the muzzle (front end of the barrel, where the bullet comes out) is pointed at all times. Be sure of your target. This is often listed as a separate rule, but it is part of the first: Whatever your muzzle is pointed at should be able to stop your bullet without unintended harm, and if there’s a chance you’ll miss the target then be sure there’s no chance you could injure people or property beyond the target. The “safe direction” can vary with the particular gun and the circumstances. Examples:

In most populated areas there are ordinances and laws against discharging firearms outside of the course of legal hunting or self-defense. Shooting ranges allow people a safe harbor to practice discharging their guns. However, stricter rules are typically enforced at shooting ranges than would apply elsewhere.

When you go to a range you should expect to find a firing line, and the following conventions:

Many shooters, especially those whose only experience comes from shooting ranges, are unaware that the following conditions are considered safe:

How Dangerous is Ammunition?

Loaded ammunition, even in large quantities, is not particularly dangerous. A round will not discharge unless it either sustains a concentrated strike to its primer or else it is heated to the powder’s autoignition point, which for smokeless powder is 300-400F. And a round that discharges outside the confines of a gun barrel is roughly equivalent to a firecracker of the same size. I wouldn’t want to hold a round in my hand and discharge it, and I wouldn’t set my kids loose with a hammer on a batch of live rounds. But it’s only when the energy of the round is concentrated in a gun barrel that it becomes a weapon. For example, in one demonstration firefighters confirmed that they could safely approach piles of burning ammo cooking off: their standard protective gear was sufficient to stop all projectiles!

How Dangerous Are Guns?

In the normal course of operation firearms pose various dangers to shooters and bystanders (beyond the obvious danger of fired bullets).

Most recoil-related injuries are minor. 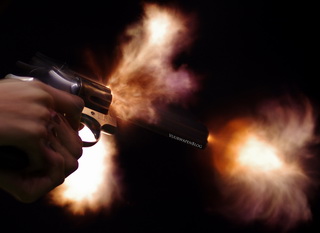 Revolvers have a gap between the cylinder and the barrel through which propellant gas vents at peak pressure. Revolver shooters must be sure to keep their hands and fingers clear of that gap during firing to avoid burns and even maiming.

A properly operating firearm without a suppressor poses dangers to hearing. Muzzle blast can exceed 160dB.

A supersonic bullet alone creates a sonic crack that can approach 140dB at a distance of 10 meters from its flight path. However, since the sonic crack emanates from the bullet and not the muzzle it is only a problem in confined spaces or when a bystander is adjacent to the bullet’s path (e.g., working in the target pits). Therefore hearing protection should be worn whenever:

Guns are machines for projecting hot metal at high velocities. Eye protection should always be worn when in the vicinity of discharging firearms.

Lead is the most commonly used projectile core. If the base and bearing surfaces of a bullet are not jacketed (typically in copper) then small amounts of the bullet will vaporize during firing. More significantly, lead styphnate is the most common priming compound, so each tiny primer pellet ejects some amount of lead into the air. Unless you specifically select lead-free primers and lead-free or jacketed bullets you will be exposed to some amount of lead during shooting. To avoid accumulating toxic levels of lead in your body avoid touching food before washing your hands. Keep in mind your shooting clothes and gear will have lead residue on them. Indoor ranges can amplify the risk of lead poisoning depending on their design and maintenance.

You can’t appreciate the frequency and unpredictability of ricochets until you’ve seen a high-volume tracer shoot. (Here’s a video showing an M134 firing from a helicopter. It’s shooting fifty 7.62 NATO rounds per second, and every fifth bullet is a tracer. The red lights filling the sky as it shoots are ricocheting tracers.) Even when directed at earthen berms a surprising number of bullets can deflect up to 90 degrees from their flight path and head off in a random direction. Fortunately they almost always do so at a much reduced velocity. But bullets that hit small rocks can create secondary projectiles that can head almost anywhere.

Ammunition can be readily sabotaged to either fail to fire or to expose a gun to destructive pressure levels.

A firearm can be sabotaged to fail to fire. Typical function checks cannot detect all sabotage or mechanical failures. The best test I know of to confirm a gun will fire when loaded with a live round, besides test firing it, is to rest a pencil or other flat object directly against the firing pin hole and pull the trigger. If the gun is working the firing pin should pop the pencil forward.

Of course firearms can also be sabotaged in numerous ways to fail only under live fire. If you are moderately concerned you should follow a proofing protocol. If you are very paranoid that your firearm has been subject to deteriorative sabotage then you would need forensic tests to verify the integrity of its critical components.

Fortunately, modern quality firearms are designed to fail “gracefully,” venting gases and metal fragments away from the shooter as much as possible. I have read numerous reports of catastrophic failures, and I don’t recall any in which the shooter suffered serious injuries.