The P239 is the sub-compact variant of Sig Sauer’s classic full-power autoloading pistol, making it a great deep concealment or backup gun. 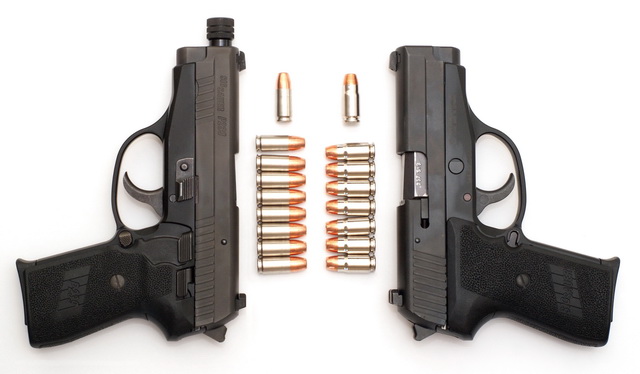 On the right is a ten-year-old standard P239. On the left is a recent “Tactical” variant, which includes front serrations on the slide and Sig’s Short-Reset Trigger (SRT). This one also has an extended barrel threaded for a suppressor, which increases the barrel length from 3.5″ to 4″. Both pistols are equipped with SIGLITE night sights. (Illuminated sights are essential for any pistol that might need to be used in low-light conditions, as defensive arms so often are.)

The P239 is available in 9mm, .357 SIG, and .40 S&W. The left pistol is chambered in 9mm, allowing it to carry 8+1 rounds vs 7+1 in the pistol on the right, which is shown in .357 SIG. Switching calibers is only a matter of changing the barrel and recoil spring, and putting in the correct magazine.

Many of the arguments over defensive calibers are anecdotal, and in that domain people who have to shoot a lot of animals consider the .357 SIG to be a more reliable stopper than the slower alternatives here. Higher velocity also seems to offer some resistance to deflection and assistance to barrier penetration, though the nuances vary largely with the bullets and materials being shot. Nevertheless, there are two objective metrics that everyone agrees on: (1) Kinetic Energy, which determines the maximum amount of damage a bullet can do, and (2) Momentum, which is proportional to recoil, which determines how difficult it is for a shooter to control the gun and make accurate follow-up shots. While Energy continues to be quoted in foot-pounds, the shooting industry has adopted a measure of momentum called “Power Factor,” which we will use here:

The .357 SIG is a clear standout for a short-barreled pistol like the P239: Of the available calibers it offers the highest velocity and energy without exceptional recoil. However, it is not as widely available as the other two calibers. Also, 9mm is significantly cheaper and can squeeze one more round into each magazine. If I were on a budget and wanted to do a lot of practice I would probably use 9mm at the range and switch the gun back to .357 SIG for protection.

Sigs are fine pistols. The examples here cost about $1000 each. The fit, finish, operation, and reliability of these guns are superb.

The classic Sig Double-Action/Single-Action (DA/SA) trigger system offers some unique features. These pistols are designed to be carried with the hammer down. In that condition the first pull of the trigger is a long and heavy (about ten pounds) double-action that serves to cock and then release the hammer. After the first shot the hammer is cocked and the trigger performs the single action of releasing the hammer (with just over four pounds of pressure). When the shooting is over the decocking lever (second on the left side) lowers the hammer, rendering the gun safe to holster. I.e., the gun’s “manual safety” is the double-action trigger pull. That “safety” can also be disengaged by manually cocking the hammer when the gun is first drawn.

The single-action trigger pull and reset are superb. The standard trigger takes about half an inch to reset. From there it is slack until pulled back to the sear release point, where it breaks and stops crisply. The SRT, standard on the Tactical and an easy $50 upgrade on any other model, takes the trigger to a level I previously thought existed only on custom-tuned 1911s: The SRT resets in little more than an eighth of an inch, and there is no discernible slack after the reset. This allows a shooter with a properly disciplined trigger finger (i.e., one that doesn’t unnecessarily release or jerk the trigger) to fire shot strings with only minimal finger movement.