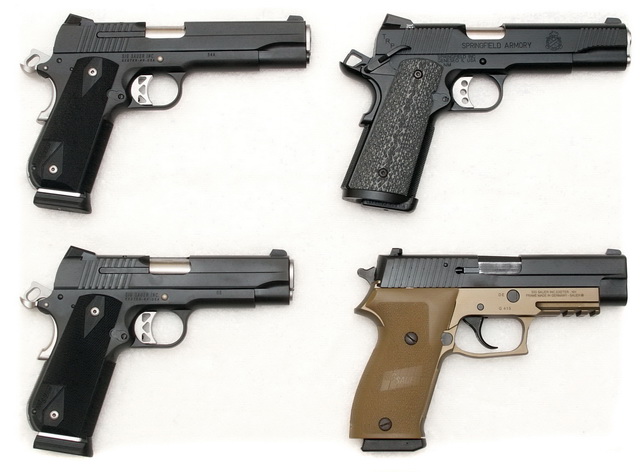 Shown here are four autoloading pistols chambered for the .45 ACP cartridge. Three are incarnations of the 1911, and bottom right is one alternative I consider superior to that design: The Sig P220 (this one a “Combat” edition with an extra $150 of anti-corrosion coatings). On the left are Sig Sauer’s $1200 Nightmare and Nightmare Carry variants of the 1911. Top right is the Springfield TRP, a near custom-grade 1911 that costs almost $1800.

John Browning’s 1911 pistol is a historic firearm, made even more remarkable by the fact that the century-old design is still considered competitive with the most modern handguns on the market. It is not uncommon to see custom-tuned 1911s selling for $2000-$3000. The high end of the custom 1911 market exceeds $5000. I will admit that a hand-finished 1911 can be a beautiful machine: a reliable, durable, precise pleasure to shoot.

But I find a few drawbacks to the 1911. The first is that you have to really pay up to get a 1911 that equals the fit and finish of the $1000 P220 I show for comparison. (See my praise of the Sig Sauer P22x series here.) Even these more expensive Sig Nightmares exhibited out-of-the-box stickiness in trigger pull and operation that left me feeling like they needed to be cleaned and polished, or maybe more broken in. The Springfield TRP, on the other hand, provided the slick, transparent handling I have only briefly experienced with other (even more expensive) custom 1911s.

One other personal objection I have to the 1911 is the manual safety. I recognize that for many shooters this is not an issue: They train to habitually disengage the safety while drawing the gun from a holster, and religiously reengage it when the gun is not in action. However, my objection is based on the following points:

The other manual safety on the 1911, the grip safety, can also be annoying if poorly executed. The worst may fail to engage when grasped naturally by some hands. The protruding nub seen on the three examples here is a good countermeasure for that problem, but on the Nightmares that nub is too pronounced and so it presses irritatingly into my hand. On the TRP the grip safety nub is not noticeable.

Granted, these safeties permit one of the most wonderful features of a well-executed 1911: Its trigger pull. The 1911 trigger is single-action: The gun is designed to be carried cocked and locked, so once the safeties are disengaged the trigger serves only to release to hammer. As a result the trigger can be tuned to extremely light pull weights with minimal travel and reset. As I have said in previous reviews, classic Sig pistols with the new SRT trigger in single-action mode are just as good, but the 1911 set the standard. Triggers this good remove a significant obstacle to precision shooting.

In terms of hand-feel I haven’t found any 1911 to be perfect. A single-stack 1911 grip is relatively narrow, and my large hands are used to the slightly fatter grips of double-stack handguns. The 1911s shown here have aggressive front-strap checkering — the TRP’s so sharp that it actually hurts. I will note that I distinctly prefer the bobbed heel / “fastback” grip of the Nightmares to the traditional straight-back of the TRP, as it allows for more even palm contact with the rear of the grip.

All of the Sig Sauers have a common drawback: For some reason Sig’s magazines have recently failed to match the quality of their pistols. Fortunately the P220 accepts standard 1911 magazines, and excellent ones like Wilson Combat’s are available for the same price as Sig’s. (MEC-GAR supplies top-notch magazines for other Sig models.)