Pictured here is an AR-15 with a $1150 Noveske Rogue Hunter Upper chambered in 300 BLK. I bought the upper from a friend the first time we took it to the range. He didn’t think it justified adding another caliber to his collection; I fell in love with it. It has a pistol-length (very short) gas tube so it reliably cycles any load, even without a suppressor. It has a stunning stainless steel barrel with 1:7 polygonal rifling, sheathed in Noveske’s NSR KeyMod handguard. After years of work with piston rifles I guess I had forgotten the virtues of DI guns: This is so light, so accurate and, with a suppressor shooting subsonic rounds, so quiet!

My first review of an AR-15 criticized its direct gas impingement (DI) action for causing unnecessary fouling and heating in the receiver. Since I like to keep guns in mint condition, scrubbing and scraping baked-on carbon fouling from the action after every range trip became a dealbreaker: That AR-15 is one of the few guns I have ever sold as I moved my collection of autoloading rifles to what I considered to be superior piston-based actions. I have since realized the situation isn’t so simple.

One technical clarification is in order: The standard AR-15 action is not really “direct impingement.” Eugene Stoner took pains to clarify that in his patent on it, characterizing it instead as a gas piston system with the operating rod cleverly replaced by an expansion chamber on the bolt carrier itself. Nevertheless, to aid discussion and follow tradition I will continue to refer to the Stoner action as “direct impingement” (DI) and reserve “piston” for actions with op rods.

After years of testing piston rifles with suppressors I have learned that no matter how you restrict the gas flow on a conventional autoloader you can’t keep fouling out of the receiver. Suppressors hold more backpressure over a much longer period than an open muzzle, which results in a lot more blowback through the chamber when the action unlocks and ejects the fired case. You can actually see the blowback out of the ejection port in this remarkable photo by Oleg Volk:

You can also see evidence of the difference on these .308 cases: 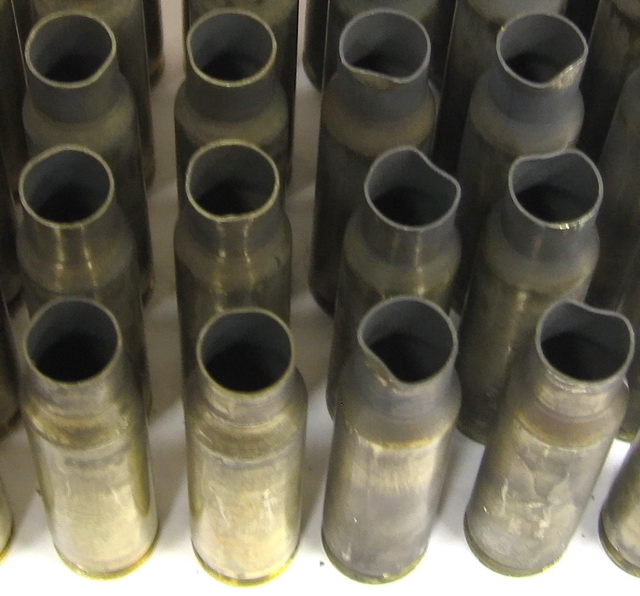 Piston guns still retain their other fundamental advantage over DI guns, which is that the action stays cool (though the forward piston blocks get scaldingly hot). But as I noted in my last post, advanced coatings can also help to make either easier to clean.