This is my Steyr AUG/A3 SA USA, with a NATO conversion kit (covered in this separate review), and sporting an EOTech 512 sight.  The AUG/A3 is the latest version of an Austrian 5.56mm tactical bullpup carbine, first produced more than 30 years ago, that is used by police and military units around the world.

Bullpup firearms have always struck me as a great — even obvious — idea:  After all, why cantilever the entire barrel and action forward of the trigger, using the foot or more of stock between the grip and butt for nothing more than a cheek rest?  Moving the action behind the trigger gives a much more compact and balanced weapon for a given barrel length.

The NFA gives us an extra incentive to pursue bullpups:  Since unregistered firearms with stocks have to carry barrels of at least 16″, a standard rifle design is going to far exceed the minimum overall length (from butt of the stock to end of the barrel) of 26″:  An AR-15 with a 16″ barrel and a 12″ length-of-pull is 36″ long.  The AUG, with the same barrel and length-of-pull, comes in at just over 28″.

Of course there are some complications in the execution.  The most significant for autoloading guns is where to throw fired cases.  The FN P90, a pistol-caliber bullpup PDW, can eject straight downward because its magazine sits on top of the gun.  But when the magazine is inserted underneath the action that path is blocked.  FN’s F2000 and Kel-Tec’s RFB actually eject the cases forward into a chute that eventually drops them in front of the gun’s body.  Like the SA-80, TAR-21, and FAMAS (also military bullpup rifles, but ones that are not currently available in the U.S.), the AUG uses a conventional side-ejection action.

Some people are fazed by the fact that the ejection port is just opposite the shooter’s head when the gun is shouldered. Having already put a few hundred rounds through mine I can attest that you won’t even notice.  A religious tactician might complain that this gun can’t be shot cross-shoulder.  You definitely would not want to fire it from the left shoulder (unless you like eating hot brass) but when tactics require it the gun can be thrust forward and fired from the left-hand side — particularly effectively when equipped with a good holographic sight.

In 1989 the federal government decided to apply a provision of the GCA to ban the importation of a number of foreign-made “assault rifles,” including Steyr’s AUG.  A few thousand AUGs that had been imported prior to that date became collector items that traded for $3-4k apiece.  After the 1994 Assault Weapons Ban expired in 2004 two domestic companies began to develop AUG clones: TPD’s AXR and MSAR’s STG.  Soon Steyr decided to join the action by teaming with Sabre Defense to assemble bona fide Steyr AUG’s domestically to serve the U.S. market.  These began shipping in 2009 as the Steyr AUG/A3 SA USA to indicate that they are Semi-Auto A3 variants assembled in the USA. (Their serial numbers all include “USA.”)  In September I discovered the price had fallen below $1900 so I promptly grabbed one at a gun show.  The complete AUG USA package includes a chrome-lined 16″ 1:9 barrel, two magazines, a soft case, sling, and a cleaning kit that fits in the rear of the stock.

According to Steyr the majority of the AUG USA’s components are made in Austria.  Of the 12 components made in the US the two major ones are the stock and the barrel assembly.  All other parts are imported and undergo final assembly by Sabre Defense.

One unfortunate specification being preserved in the AUG USA is the European M13x1 muzzle threading.  Ratworx sells a thread adaptor for the 1/2×28 threading used by suppressors here, and Steyr said they are also working on releasing one. I suggested to Steyr that they instead work on a 1:7 twist 16″ barrel with 1/2×28 threads for this market since most tactical shooters now prefer heavier bullets that require tighter rifling, and we would then have two reasons to buy a new barrel group!

The A3 variant comes with a nice main rail for sights and a small forward rail at 1:30, which would be great for a laser or light. One drawback of the main rail is that it sits awfully close to the charging handle (a.k.a. “cocking slide”). The manual repeatedly instructs the user to operate the slide with an upward-facing palm to avoid scraping knuckles against the corners of the rail. I simply capped my unused rails with low-profile rubber Falcon covers ($2/6″ from Botach) and this is no longer an issue. 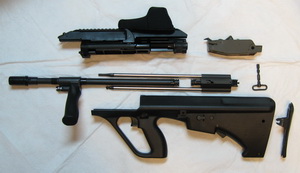 The AUG features an ingenious modular design. With no tools it quickly breaks down into 5 component groups shown here: Barrel, receiver, bolt carrier, stock, and trigger pack. (The butt pad and stock pin have been removed from the stock group as part of the take-down procedure.)

I was always enamored of the AUG because it was a beautiful and clever bullpup, and I am even more drawn to it since I have sworn off direct gas impingement actions (because they’re too hard to keep as clean as I like my guns): The AUG uses a two-position gas piston, so all the carbon fouling is limited to a small regulator, piston, and spring next to the front handle on the barrel assembly.

The AUG trigger is notoriously bad, with a typical out-of-the-box pull weight of 9 pounds!  Contrary to some conjectures this is not a problem intrinsic to bullpup configurations.  Having studied the trigger pack I don’t believe it is even a consequence of constructing the sear and hammer out of plastic(!), although that may be an impediment to achieving a truly match-grade trigger.  Steyr has simply constructed this gun with a trigger spring far heavier than necessary.  This is probably a holdover from their original two-stage select-fire trigger system, which uses a partial trigger pull to discharge a single shot and delivers full-auto bursts with the trigger pulled fully to the rear.

For semi-auto AUG’s the trigger spring can be safely and significantly lightened.  But at present the only aftermarket part available to do so is the TriggerTamer: A patented plastic piece that replaces the rear tab on the trigger pack to engage the trigger spring at a slightly less compressed angle, resulting in a one-third reduction in trigger weight. [Update: See my post on AUG Trigger Improvements.] 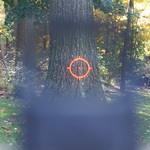 With the combination of its compactness and heavy trigger the AUG is ideally suited to CQB or the emerging “Personal Defense Weapon” (PDW) roles.  Given the difficulty of triggering precision shots I think a magnified optic would be poorly suited to this gun.  The ideal sight is a holographic red-dot, which gives the shooter the widest field of view and greatest ease of sight acquisition because one’s head does not have to be aligned with the sight: If you can see the dot anywhere in the sight window, it’s covering the point of impact.  I ponied up $350 for an EOTech 512 from Botach.  This sight combines proven military ruggedness with my favorite red-dot reticle: A large 65 MOA circle for fast targeting and a 1 MOA center dot for more precise sighting.  Many other red-dot sights have larger center dots, which cover too much of a target for precise shots at longer distances.

With the Obama-fueled gun-buying spree winding down and the economy bottoming out gun inventories are starting to climb. Apparently Steyr is now releasing the A3 to distributors for $1750. Meanwhile MSAR has dropped the wholesale price on its STG to $1050. MSAR is also doing some clever things with their fourth-generation (“E4”) models, including standard NATO magazine compatibility and multiple calibers. Steyr will probably not be able to keep up with MSAR’s innovations because the AUG USA is a tiny portion of their business, and also because they are very wary of crossing any lines with the ATF.