This is my recent AR-15 pistol build. The upper assembly from CMMG was $700 and features a KeyMod free-float handguard and 8″ medium barrel. It is chambered in .300BLK, which is currently the most versatile and efficient AR-15 caliber for such short barrels. I assembled the lower from a Seekins Precision forged receiver, Phase 5 Tactical pistol buffer tube, Noveske QD end plate, CMC 3.5lb single-stage trigger, and Stark SE-2 grip. Total component cost for the lower was $450. Unloaded weight for the complete firearm is only five pounds.

A generation ago sub-machine guns were the middle ground between handguns and full-power rifles. A famous photo from moments after the 1981 assassination attempt on President Reagan shows a Secret Service agent readying an Uzi he had produced from a nearby briefcase. We have since learned that power is more important than volume of fire, and that guns on full-auto with concealable magazines run empty far too quickly. Today the niche between handguns and long guns is filled with rifle-caliber “personal defense weapons” (PDWs), which are powerful enough for a serious gun fight but still portable enough for every day use and potential concealment. 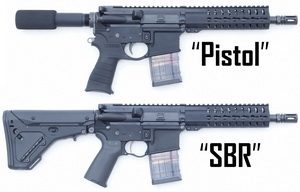 The advantage of a “pistol” AR-15 is that it can be equipped with a barrel shorter than 16″ without the hassles of registering it as a Short-Barreled Rifle (SBR). What qualifies it as a pistol is that it doesn’t have a full stock or second vertical grip, yet the buffer tube required for the AR-15 to function can serve in a pinch as a three- or four-point mount, providing accuracy on par with a traditional carbine. (The ATF, struggling to make 80-year-old laws look reasonable in spite of evolutions in gun design and tactics, recently ruled that even arm braces do not turn a pistol into an SBR.)

The following photos show how an AR-15 pistol can be shot effectively and accurately. When carried with a single-point sling the sling itself can act as a third point of contact: The trigger hand pushes the gun forward and the sling provides stabilizing tension for immediate action. Alternatively, as in the middle photo, cheek contact with the buffer tube provides a more stable sight picture. Finally, it is possible to tuck the rear of the buffer tube back into the shoulder pocket to create a fourth point of contact in a true “Nose To Charging Handle” (NTCH) mount.