In 2007 Kel-Tec announced they would produce a clever new .308 Rifle, Forward-ejecting, Bullpup style (RFB). It immediately hit the wish lists of gun enthusiasts across the country. Mine is shown here with a 3-15x50mm Nitrex scope and AAC Cyclone suppressor.

This gun has a number of commendable features:

The RFB does have a few shortcomings that I will touch on in the course of this review, most critically in its gas system design.

The Biggest Challenge: Getting one

As of 2011 Q1 Kel-Tec has produced only 1500 of these rifles. The MSRP of $1880 hasn’t changed since it was first announced. Kel-Tec is irritatingly detached from the market for its products: The company increases neither production rates nor prices in response to ongoing high demand. Furthermore, the company only sells its firearms through an inscrutable network of distributors. To this day none of my dealers have been able to get their hands on an RFB. Meanwhile, people who do acquire them have always been able to scalp them on GunBroker.com for hundreds of extra dollars. Kel-Tec, obliviously, sells these to its distributors for under $1200.

I finally obtained one by learning through their fan forum that a batch was shipping to a particular distributor who was willing to make a direct sale to me (transferring, of course, through an FFL). My final cost was just $1350 which is considered closer to the “fair” street price than the MSRP.

I have been a longtime fan of the bullpup firearm design, which places the action and magazine behind the trigger. The benefits are pretty clear in the following picture showing the RFB (18″ bbl) next to a comparable conventional semi-auto rifle (the FNAR, 20″ bbl) and a traditional bolt-action sniper rifle (the Savage 10FP, 26″ bbl).

The reduced length alone makes a bullpup much more practical for enclosed or close-quarters use. What you may not realize until you handle one is that the center of mass is moved so far to the rear that it is easy to shoulder and shoot, if necessary, with just one hand.

Kel-Tec also adopted one of the latest innovations in bullpups (first seen on the bulbous FN F2000): forward ejection. This solves one of the traditional drawbacks of a bullpup rifle, which is that it ejects right next to the shooter’s head. Side-ejectors are difficult to shoot cross-shoulder (to shoot weak side you have to either hold the gun out from your shoulder or cup the ejection port with your support hand to avoid eating hot brass). The RFB is truly ambidextrous. Kel-Tec earns extra points for a particularly compact action: The following photo shows it is slightly shorter overall than a Steyr AUG, even though the AUG only has a 16″ barrel! 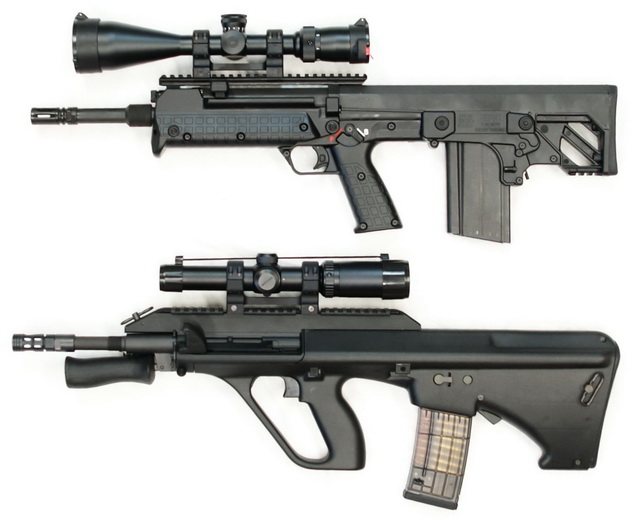 While relatively crisp, the RFB trigger is still 6.5 pounds. This may have limited my ability to wring the full accuracy out of the gun during my first test session, during which I fired three different cartridges, with and without a suppressor. Kel-Tec only claims this is a “2MOA” gun, and that was the best I was able to shoot with factory match-grade 168gr cartridges.

Kel-Tec chose to cut their 18″ barrel with 1:11.25″ twist rifling, which is on the slow end of standard .308 twist rates. This is not the best choice for the slower muzzle velocities produced by this short barrel, and it limits the ability of this gun to shoot the heavier and longer .30″ bullets on the market. 1:10″ would be a more logical twist rate. 1:8″, though not yet common in this caliber, would not only guarantee stability across the full range of .30″ bullets, but also would allow the gun to accurately shoot subsonic ammunition.

I found the pistol grip to be another shortcoming. It is made of a relatively slippery plastic and is not replaceable. Kel-Tec should have designed this rifle for compatibility with the vast market of modular AR-15-pattern grips, allowing owners to find a size and finish that suits their hands.

The RFB gas system — the core of any self-loading rifle’s operation — has some serious design flaws. Kel-Tec seems to have developed theirs without any regard to the state of the art in piston-driven rifles. As a result their rifle is currently not suited to use with suppressors.

The RFB gas block is a simple T with fixed channel sizes allowing gas to flow through a forward exhaust port and backwards through the piston. The only means of controlling gas pressure on the action is to turn a “Gas Adjust” valve that changes the proportion of gas that can exhaust through the forward port, but that doesn’t restrict total flow through the gas block. This is the biggest design flaw in the gas system, and it makes this gun unsuitable for use with a suppressor: Suppressors boost total pressure on the gas system. Modern pistons offer a “Silencer” setting that compensates for elevated backpressure by severely choking flow through the gas block. Since the RFB can’t reduce the flow of gas from the barrel the manual instructs users to remove the “Gas Adjust” valve in order to maximize the ability of the extra pressure to vent out the forward port. This is exactly not what you want to do when shooting with a suppressor: The high-pressure gas venting out of the gas block is not contained by the silencer and so it creates its own loud report.

In theory Kel-Tec could correct this problem by replacing their “Gas Adjust” valve with a conventional “Gas Select” valve: A dial that extends across the barrel port in the gas block, completely obstructing the flow of gas. The circumference of a Gas Select valve is drilled with holes of varying diameter, typically offering four settings:

I.e., a proper “Gas Select” valve turns Kel-Tec’s “T” gas head into an “L” so that 100% of the gas tapped from the barrel impinges on the piston.

This takes us to the other gas design flaw: The RFB piston allows impinging gas to flow past its head when it cycles. The problem with this is that the piston vents into the carrier channel where the propellant gases then flow through the entire gun, coating everything in hot carbon. One of the key benefits of piston actions is supposed to be the isolation of propellant from the receiver. But in the RFB even the bolt at the extreme rear of the gun gets as dirty as the old direct-impingement AR-15 bolts I swore off years ago.

Kel-Tec needs to redesign the RFB piston to vent its gas outside and away from the receiver.