X-ring rubber bullets have been around for more than a generation. Currently they are manufactured by the Meister Bullet & Ammunition Company. Boxes of 50 retail for around $12. 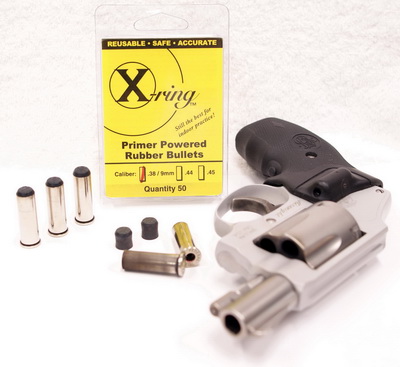 These should not be confused with “less lethal” or riot-control projectiles. Rather, these are reusable primer-powered training bullets. I tested both .38 and .44 caliber versions.

Because they are powered only be a primer X-rings carry very little energy: They certainly will not cycle an auto-loading action. But they function seamlessly in revolvers when correctly loaded: In order to prevent the detonating primer from jamming itself against a revolver’s breech face it is necessary to drill out the primer pocket’s flash hole to 3/32″ on .38 brass and 1/8″ on .44 or .45 brass. (Note that with these expanded flash holes that brass should never again be used with standard loads, so it’s important to mark and segregate brass for use with X-rings.)

Loading X-ring ammunition is simple: seat a primer, then push a bullet into the neck of the case by hand. The average .38 X-ring bullet weighs 7.7gr, and the average .44 X-ring weights 14gr. I tested the .38s out of my 2″ S&W 642 revolver and the .44s out of my 3″ S&W 629. Longer barrels will only decrease muzzle velocity since primers produce so little propellant gas.

On the .38 I tested both WSP and CCI 550 “Magnum” primers and didn’t detect any significant difference in velocity. On the .44 I used WLP primers. I measured the average velocity for each load at 5, 15, and 21 feet:

Obviously these are not ballistically efficient projectiles. At these ranges they are as accurate as conventional ammunition, but even at 7 yards their point of impact has dropped almost a full foot due to their low velocity, which is decreasing so rapidly I don’t think they would be useful at much greater distances.

The great thing is that because they are so light the bullets will stop inside a cardboard box with a towel draped in the middle. They are reusable — the manufacturer claims that if they’re cleaned with silicone lubricant they are good for 75-100 firings. I didn’t see any degradation after shooting them five times. I noted that the first bullet through a clean barrel leaves a thin stripe of rubber against any sharp rifling, and that seems to buffer subsequent shots against wear.

It’s easy to clean a gun after shooting these: Any rubber peals away from the barrel with a single pass of a dry brush. However I was surprised at how dirty primers are: In the photo above you can see the fired nickel-plated case coated in a layer of soot, which also ends up in all the usual places on the gun. Immediately after testing I was able to wipe off all the fouling with a dry rag.

If you’re using conventional (lead styphnate) primers I would hesitate to shoot them in unventilated indoor spaces because this lead-laced fouling doesn’t all settle on the gun: It’s dispersed in the air, and it’s not good for you, especially if it accumulates in an enclosed space.

Finally a note of caution: These look like a tempting tool for close-quarters force-on-force training. Their impact energy is in the same league as a paintball, Simunition, or heavy air-soft pellet, which means that with adequate clothing and head protection these should in principle be safe to shoot at a real person. However, unlike those other projectiles X-rings fire from unmodified guns that are fully capable of shooting full-power ammunition. No matter how careful you are eventually a standard round will slip into a gun somebody thinks is loaded only with X-rings. Therefore, I would never fire these at a person, and I would always ensure my practice backstop can safely contain a real bullet.