The AUG has a notoriously bad trigger. Not only is the trigger pull about 10 pounds, but it is also very “sticky.” Some people just shrug and say, “bullpups have bad triggers.” That’s not necessarily so. For example, Kel-Tec’s RFB has a crisp 6.5-pound trigger right out of the box. I will explain the origin of the AUG’s bad trigger as well as steps that can be taken to improve it.

The original AUG was an infantry rifle with a clever select-fire mechanism: Pull the trigger partly to the rear for a single shot. Squeeze it all the way to the rear and the gun fires a fully-automatic burst. For this feature to be reliable in the field the AUG was designed with a long and heavy trigger to avoid unintentional full-auto discharges. Perhaps compounding this design decision is the fact that militaries have not historically made “trigger feel” a high priority for infantry rifles; if anything a heavy trigger is considered a safety feature that reduces the possibility of unintentional discharges.

Steyr did not consider it worthwhile to create a smoother or lighter trigger for their semi-automatic-only trigger packs.

MSAR, which specifically built its rifle for the U.S. civilian market, doesn’t have a good excuse for copying the heavy AUG trigger spring.

One easy way to improve these triggers is to lighten the Trigger Spring (Part 13). Unfortunately this is a complicated piece — you can’t just snip a few coils from it — and nobody manufactures a replacement spring that’s any lighter.

A few years ago Ben Langlotz realized that you can lighten the Trigger Spring by reducing the installed tension. He invented a clever device called the Trigger Tamer that replaces the standard Bolt Retaining Lock (Part 12) and engages the Trigger Spring at a higher angle. This part is covered by patent #7,165,352. The patent protection also explains how he can charge up to $60 for a cut piece of Delrin plastic. The following image shows a trigger pack with the Trigger Tamer installed on the left and a standard trigger pack on the right. 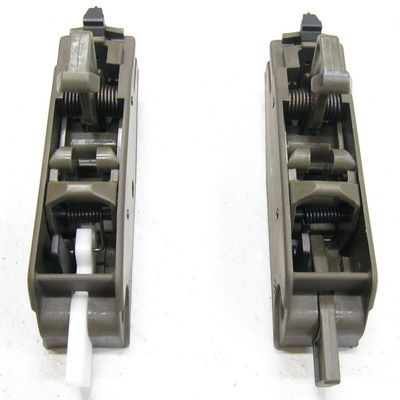 After I installed the Trigger Tamer in my AUG the trigger pull was more than 3 pounds lighter, going from about 9 pounds to under 6. It was also substantially smoother.

Matt Mikhail realized that a much of the “stickiness” in the trigger pull is the result of plastic-on-plastic friction, and further that the most significant source of friction is the pressure of the cocked hammer against the “sear” (i.e., the bridge of the Trigger Slide). Because the hammer is so light (being made of plastic) the Hammer Springs must be very heavy to ensure the hammer hits the firing pin with enough force to reliably ignite primers. Matt cut and bent a small tab of thin steel to wrap around the sear, producing a metal-on-plastic interface at this high-pressure sticking point. He sells this as the Neu-Trigger. He has applied for a patent and is currently charging $27 for the piece, shown installed on my MSAR trigger pack here:

I tested a Neu-Trigger and found that it not only smooths out the action considerably but also reduces the trigger weight by about 1.5 pounds. It’s not always a drop-in part: The corners of AUG sears sometimes need to be cleaned up for it to fit; MSAR hammer faces need to be sanded down in order to function with it installed. Nevertheless it’s a clever device that shows the shortcomings of plastic triggers!

Of course there is a lot of other plastic-on-plastic friction involved in the trigger action of the AUG. Note that it is important not to use any petroleum-based lubricants here since they could dissolve or weaken the plastic. I tried lubricating the numerous contact points of the Trigger Slide with molybdenum disulfide but was unable to measure any significant effect on the trigger pull. Ben Langlotz sends three pages of instructions with his Trigger Tamer for disassembling, polishing, and lubricating the trigger pack and trigger bars. While these only reduce the trigger weight by a few ounces he claims they substantially smooth out the trigger action.

At this point I am hoping for someone to bring to market: