Not long ago if you wanted to carry more firepower than a pistol, but you wanted something more wieldy than a rifle, you would carry a sub-machine gun. Typically equipped with folding or collapsing stocks and extended magazines, these could put more rounds on a target more quickly and accurately than a handgun. But sub-machine guns shoot handgun rounds, not rifle rounds, and even before the ubiquity of body armor the ability of the former to penetrate barriers and stop bad guys was a known shortcoming.

Today sub-machine guns are tactical relics, replaced by a smorgasbord of rifles with short barrels, folding stocks, and (my favorite) bull-pup configurations like the Kel-Tec RFB shown here. These are almost as easy to carry and maneuver in close quarters as sub-machine guns, but they shoot the full-power rifle rounds you’d much rather send towards a bad guy or vehicle when your life depends on it.

When I tested the Kel-Tec RFB I mounted one of my high-power scopes so that I could wring out its full potential for accuracy. Since it shoots the mid-range .308 round it wouldn’t be unreasonable to equip it that way, but since it is also proportioned for close-quarters battle I wanted to test some CQB-appropriate optics.

My favorite CQB optics are the EOTech holographic sights. Botach recently had another sale where I picked up the EXPS2-2 model shown here for just $450. The advantages over my older 512 model include a more compact body, a quick-detach lever, and side-mounted buttons so that magnifiers don’t impede operation. For this one I also opted for EOTech’s 2-point reticle, which allows for more accurate long-range ballistic compensation. 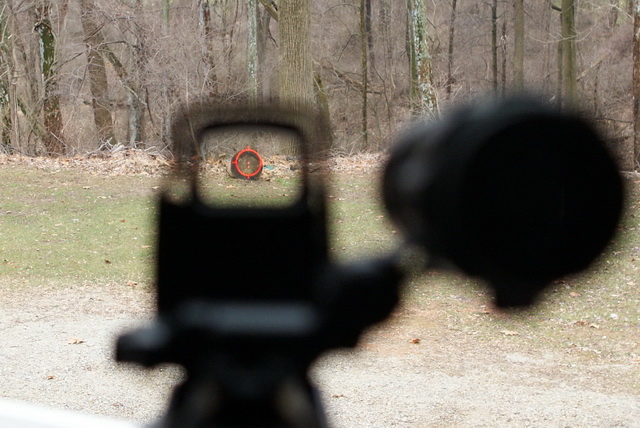 Like all reflex sights the EOTechs are parallax-free, which means that if you can see the reticle it’s on target regardless of where your eyes are relative to the display. This maximizes both situational awareness and the speed with which the gun can be brought onto a target.

But it limits the accuracy with which one can shoot a rifle: I crave the ability to add magnification, both for target identification and for shot placement. I’ve used a Burris AR-Tripler to provide 3x magnification with my other EOTech and red-dot sights, but for this .308 I wanted more power.

The only magnifier I could find at higher powers was a $100 6x magnifier from Primary Arms. In optics you typically have to pay for performance, and $100 is not a lot. The glaring shortcoming with the PA 6x G2 is that it has almost no eye relief. I.e., you have to have your eye perfectly centered and no more than an inch from the magnifier to get a full and clear image. Which, I suppose, is acceptable given its role: When you want to take a closer look you pivot it in front of the EOTech. If you take a shot you make sure your head is anchored to the rifle so the magnifier doesn’t hit your brow. Otherwise you pivot it to the side in the $75 Burris pivot mount, which also features a quick-detach lever so it’s trivial to swap it out altogether. (Compared to the LaRue pivot mount I use for my 3x magnifier the Burris mount has more slop in terms of locking to either side. But it is half the price of the LaRue.)

Here is the same target as above but viewed through the 6x magnifier. 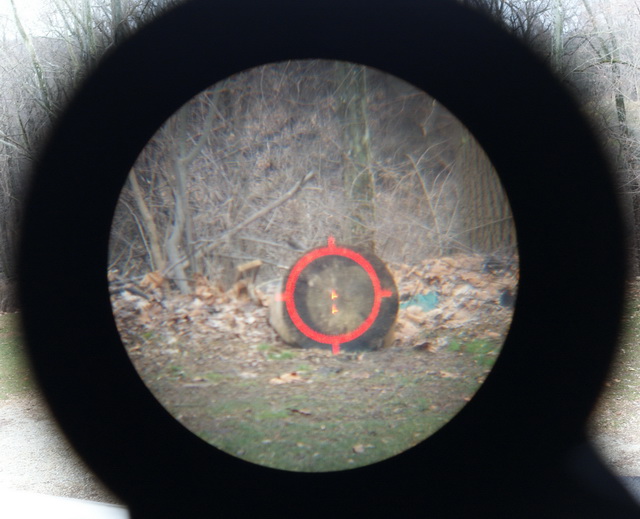 And here is the view through the magnifier locked to the side. 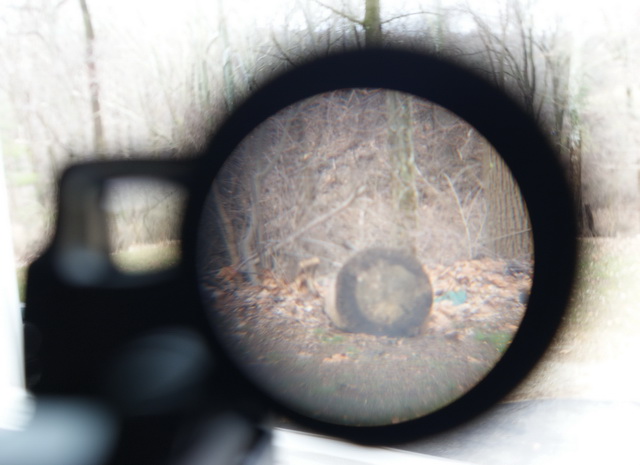