A traditional tracer bullet like the M62 carries an incendiary payload in its base. We’ve done a lot of experimenting with bullets fired “backwards” (i.e., base first), and found them to be both accurate and effective, even if their blunt shape produces excessive long-range drag. 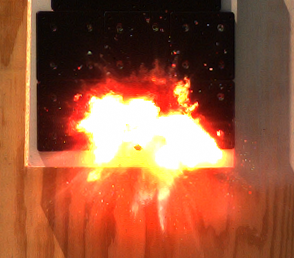 So what happens when you fire a tracer base first? First of all, the tracer doesn’t ignite in flight. But if it hits something hard, like a rock or steel target, the jacket ruptures and the impact energy usually ignites the tracer compound all at once, producing a satisfying flash and puff of smoke, leading us to call them “flash rounds” or “smoke rounds.”

Once again our friends at Aimed Research provided a high-speed video of a flash round hitting a metal target:

Granted, these are nothing like a “true” incendiary round, which sounds like a cherry bomb exploding. Following is a video of a real incendiary bullet hitting the same metal target. It has a larger payload of fuel (magnesium and/or aluminum) and oxidizer (barium nitrate).