As a new handloader I thought it would be fun to add tracers to my inventory. Tracer bullets that have been pulled from surplus military ammunition can be picked up for $15/100 at gun shows or online.

I bought one bag each of M25 and M62 tracers, but since I couldn’t find any detailed information about them online I decided to analyze them myself. Ten of each are shown here, M62’s on the left. Both tracer types are marked with an orange tip. (The black residue on the bottom of the bullets is the remnant of sealant used on military ammo and comes off after a spin in a vibratory cleaner.) 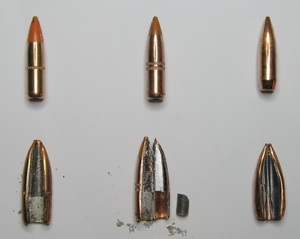 M25 tracers were supposedly designed for .30-06 rifles. They are nearly identical to the M62’s except for a second cannelure that allows them to be crimped more deeply in a case. This photo shows whole and sectioned samples of M62, M25, and (for comparison) 168gr BTHP bullets.

I weighed the M62’s at about 143 grains and the M25’s at about 145 grains. On both bullets the base of the copper jacket is crimped around a 1 grain copper cup about .20″ in diameter. The cup is seated almost .1″ deep from the base of the bullet on M62’s, and slightly more shallow on the M25’s — .06-.08″ from the base, which could account for the extra weight on the M25’s given that the overall length on both is the same. Ahead of the cup, and behind the lead core, is .40″ of tracer compound with a dimple in the center, shown here.

The tracer compound is brittle and powdery, and weighs only about 10 grains. It burns with a bright red flame for about 4.5 seconds and (in static tests at least) leaves behind 3-4 grains of ash.

In order to help conceal a shooter’s location these tracers are designed to not fully light up for the first 100 yards of flight. At muzzle velocities over 3000fps that’s just a tenth of a second from firing to the appearance of the full flame. I did a number of tests to try to determine the tracer compound’s ignition temperature as well as the mechanism by which this delay is achieved, but was unable to get consistent results.

First I took a tiny amount of tracer powder and put it directly on a thin nichrome wire linked to a dimmer switch and a thermocouple. I slowly raised the temperature to 900F but nothing happened. I shut down and then rapidly hit the heater with full current and got an immediate ignition. In later tests I opened the back of a tracer and put the compound in direct contact with a thick copper wire heated to 800F and still got no ignition!

In an attempt to more accurately simulate the conditions of being pushed from behind by the hot gases in a firearm I took an intact bullet and anchored its base directly to the top of a copper wire, which I slowly heated with a propane torch. It reached 540F and after some time at that temperature the entire tracer pellet ignited and ejected out of the back of the bullet, pushing the bullet 5 feet into the air and leaving the copper cup still on the test stand. That’s not what’s supposed to happen either, but it does suggest a potential failure mode: If the tracer compound ignites from anything other than its base a shooter will see a red flash and then nothing as the compound leaves the bullet and burns much faster dispersed in the air. This also confirms (as did later tests) that the tracer compound provides negligible thrust — in this extreme case accelerating the bullet less than 10fps.

[Update: Though they don’t significantly propel the bullet, burning tracers do extend the bullet’s range. In a summary of BRL research on .50 caliber bullets Robert McCoy notes, “The tracer adds heat and mass flux into the wake, which raises the base pressure and lowers the base drag. For the APIT, M20 projectile, the tracer reduces the total zero-yaw drag coefficient by approximately 7 percent, at all speeds tested.”]

Fortunately, it’s not hard to get a proper ignition of these tracers: Hitting them briefly with a propane flame will reliably ignite them, as shown in this video. Here is a photo of three burned tracers along with two of the recovered base cups.