A few months ago I discussed metals and coatings for firearm actions. I noted the NiB (nickel-boron) gets discolored by fouling, but my photos only showed a sparkling new NiB-X BCG. Following is a picture of what it looks like after a few hundred rounds of use, followed by ultrasonic cleaning and then aggressive scrubbing with steel and brass wire brushes. For comparison I show my heavily-used chromed BCG on top. 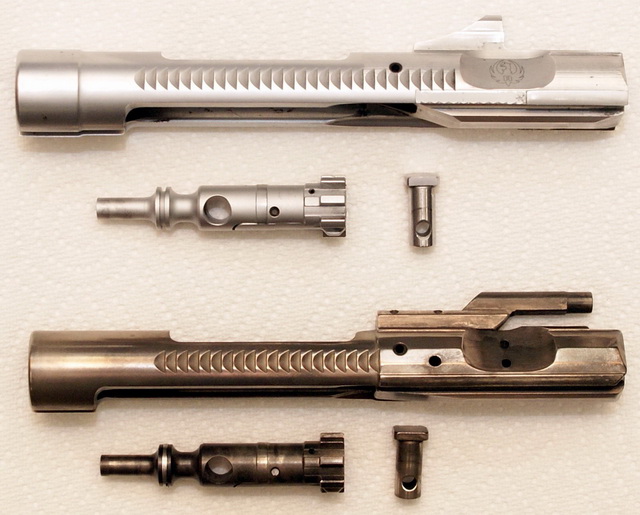 Is this just a cosmetic issue? This is the only cleaning I’ve given the NiB BCG. I haven’t lubed it and I have subsequently run a few hundred rounds more without any action failures. However it seems plausible that if fouling can bind to the surface this stubbornly it could build up to the point of overtaking the nickel-boron’s lubricity and causing a stoppage that only traditional lubricants prevent. As noted in the original article this is not a problem with chrome and NP3: All photos of those to date have been after they were used and wiped clean with minimal brushing.

Update: A number of people say it’s unfair to compare a BCG from a piston gun to one from a DI gun, since the latter is subject to much harsher fouling. So for comparison I pulled and cleaned an NP3-coated BCG I’ve been running in a DI gun: pictures in my comment below.

15 thoughts on “The Problem With Nickel-Boron”