I reload for half a dozen guns in .308 Winchester. Reloading is a lot easier if you only have to neck-size fired cases. Until recently I kept all brass segregated by rifle, and only “full-length” case-sized brass that came out of semi-autos (which are under enough pressure during extraction to bulge the case body). Then I thought I’d get clever and see if any chambers were cross-compatible, allowing me to use brass fired in one gun in others without full resizing. Sure enough, a handful of fired cases suggested that all my bolt-guns were interchangeable.

However, since this apparent epiphany I have broken a CTR stock, a Savage bolt handle, and five cleaning rods in the process of extracting rounds stuck in chambers. I have also resolved to small-base-size any case that isn’t being reloaded for the bolt gun in which it was last fired. Here are some nuances I’ve learned.

Evidently fired case size isn’t consistent. Even though I’ve been using a single lot of brass, not all loads fully form the case to the chamber. Presumably even if I stuck with the same load the brass would exhibit different springback on subsequent reloadings as it work hardens.

I eventually discovered that my DTA chamber has a relatively large base, which led to my other painful discovery: “full-length” rifle sizing dies do not necessarily size the whole case. For example, when properly set, my Lee full-length .308 die doesn’t even cover the bottom quarter inch of a case. Only a “small-base” sizing die will ensure the entire case is squeezed back into spec.

My other irritating discovery is that few “case gauges” check for full chamber fit. The Wilson case gauges I had been using all along are actually overbored to ensure they can measure fire-formed brass. They are only meant to check headspace and trim length. The fact that a case clears a Wilson gauge is insufficient to determine whether it will chamber in any gun. The only gauge I could find to guarantee chamber fit is the blue JP Enterprises one in the middle of this picture: 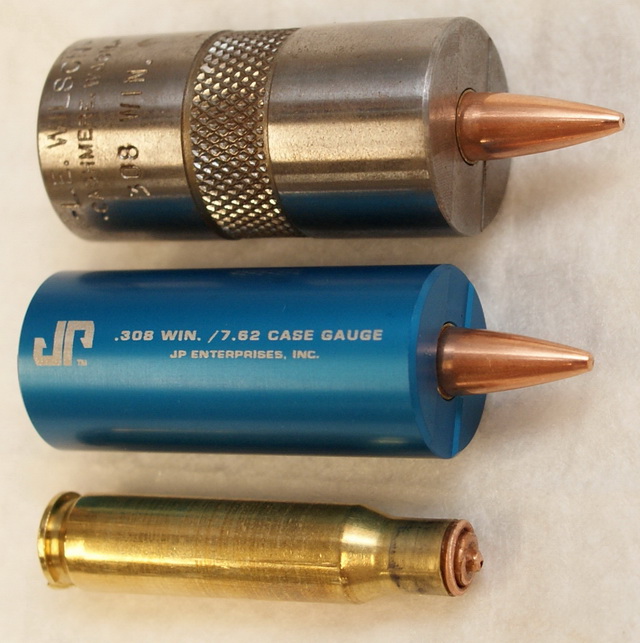 The JP gauge is cut to the minimum SAAMI chamber spec, which means that if a round clears it and fails to chamber you’ve got a chamber problem, not a case size problem. But we’re talking about very fine tolerances. The round in the JP gauge in the picture is actually oversize enough to jam in my Savage. You can barely tell that by looking, but you can feel the base protruding ever-so-slightly at the rear of the gauge.

At the bottom of the picture is one such round after a day-long ordeal: At a shooting session I pushed it into the chamber from the magazine. It didn’t even feed far enough for the bolt to begin to cam down. Rather than trying to pound it in, as I’ve foolishly attempted in the past, I immediately tried to pull it out. But the bolt wouldn’t budge. Hammering backwards on the bolt handle it wouldn’t budge. Lacking a stout cleaning rod I instead removed the scope and rammed the bolt handle against the shooting bench. (Do this enough and you’ll need to drop $25 on a replacement bolt handle.) This managed to rip the extractor free of the case, along with the rim segment it was holding, so at least I could get my bolt out.

Back home, I inserted a Tipton carbon fiber rod through the muzzle and began hammering the round back out of the chamber using a brass jag I have modified specifically for this purpose: I ground it down to just below .30″, and then drilled a hole in the middle to engage the bullet tip in order to prevent the jag or rod from driving against the side of the bore. Brass and aluminum are softer than steel, but they can pick up microscopic fouling that with enough work could scratch steel. With precision barrels starting at $300 and running over $1000 I don’t do anything to a gun that could mar the barrel, especially the leade or the crown.

Many cleaning rods, on the other hand, have paid the ultimate price in my attempts to dislodge bullets and rounds. In this case the round didn’t budge before the Tipton rod splintered. From past experience I know that no segmented rod can stand up to hammering. Coated steel rods are made of spring steel, and so unless they exactly fill the bore they convert most impact energy into vibration. Next up was the solid brass rod shown in the following picture, also bearing my special bullet-hammering jag. But first I dripped some Kroil down the bore and waited for it to penetrate. Amazingly, none did: the round had formed a Kroil-proof seal in the chamber! I tried hammering on the brass rod but it began to bend and I could measure from the chamber that the round wasn’t backing out at all.

The bottom rod in the picture was my last hope: A quarter-inch of solid bolt steel, drilled and ground at the tip to engage the bullet, wrapped in two layers of vinyl electric tape that are meticulously wiped clean before inserting it into a bore, and topped with a plastic muzzle guide. It took multiple blows with a 4-pound sledge to knock the round free.

As I said earlier, I’ve had to do this sort of thing more times than I care to count, but I’ve never seen one like this. What emerged is the round shown at the bottom of the first picture: a round that started with a full case of Varget powder under a 168gr OTM bullet that didn’t pop out until the bullet had been completely compressed back into the case!