This sequence shows me discharging a loaded round I couldn’t disassemble. There is no reason to ever do something like this other than brazen curiosity. If you want to disable a live round you should pull the bullet and dump the powder. If for some reason that fails a safer alternative to discharging it is to “cook it off” in an open pit fire. (Ensure that anyone not wearing a face shield and thick clothing stands clear until it pops.)

Firearm cartridges are not particularly powerful or dangerous unless they are tightly confined. Without a gun barrel to contain and direct the pressure smokeless powder burns slowly, if at all, and bullets are propelled only by the force of the primer. (Granted, primers are not toys. They are true explosives. Small firearm primers produce 5-10 foot-pounds of energy, and can produce pressures on the order of 25kpsi in a small closed chamber. Like firecrackers, they can burn and maim.)

The round I had on my hands contained a full load of powder that turned out to be too fast for the bullet. I managed to pull the rest of the batch, but one bullet came out and left its copper gas check in the case. In that condition it could have been safely fired in a gun, except that it could have badly fouled the bore depending on how the gas check engaged it. So instead I drilled a hole in a piece of wood to tightly hold the case neck, put on leather and a face shield, then detonated the primer with a steel punch. 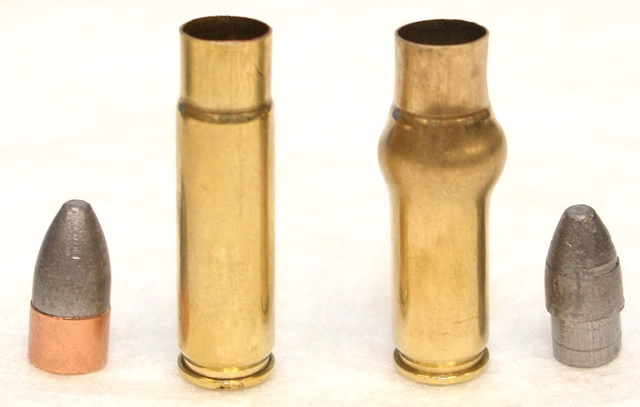 An integral pulled bullet and case are shown left. The hand-fired case and bullet missing its gas check are on the right.

The problem with any containment when discharging a round is that without experience and knowledge of the case and powder you may be surprised at where the force ends up. The unsupported case could become a projectile or fail and produce shrapnel. The bullet and any other particles in the path of the venting gases can also be ejected almost anywhere. The setup above was carefully planned to allow for the worst possible outcome in every dimension. What actually happened is that the case neck held fast in its hole in the upper plank and the unsupported annealed upper body was blown out by the pressure, but did not fail. The gas check ended up embedded in the bottom plank directly below, and the gas was able to vent out the gap between the planks, blowing only minor wooden debris along with it.