These are the rifle cartridges in common use by modern western militaries. The smallest is the standard NATO infantry round, 5.56x45mm. Adjacent on the left is the “medium” 7.62x51mm, also a common infantry round, especially in theaters where longer engagement distances render the 5.56 ineffective. Middle is .300 Winchester Magnum (.300WM), which has long been fielded for snipers needing to push beyond the 1000-yard “effective” range of the 7.62mm NATO. The .300WM is being supplanted by the fourth cartridge, .338 Lapua Magnum (.338LM), which has emerged as the top long-range military sniping cartridge. Previously, long-range snipers often relied on the largest of the “small arms” cartridges: the century-old “heavy” .50 Browning Machine Gun (.50BMG) round.

The following table lists the size, weight, and range of each cartridge for typical military loads, barrels, and sea-level atmospheric pressure. The point at which bullets slow through roughly 1100fps is a common benchmark for range because that is the speed of sound at typical air temperatures. Historically the accurate range of a precise bullet has been limited by the effects of crossing through the sound barrier. However, modern barrels tend towards faster rifling twist rates which increase transonic stability. In the last decade snipers have recorded first-shot kills at ranges where their bullets were subsonic. Snipers at high altitudes have made a number of remarkable kills at distances of up to 2700yds. The thinner air at high altitudes creates less drag on bullets and thus extends their range.

On the heavy end it’s interesting to see that the .50BMG is actually at a disadvantage to .338LM in terms of range (not to mention the added weight of the rounds and heavier guns needed to efficiently shoot it). But it does have the capability of delivering more than double the payload, so it is still in use for anti-materiel roles.


One more item that scales with the size of the round is the volume needed to suppress it. A good suppressor reduces the muzzle blast by over 30dB. Here are examples of the size and weight needed to achieve that: 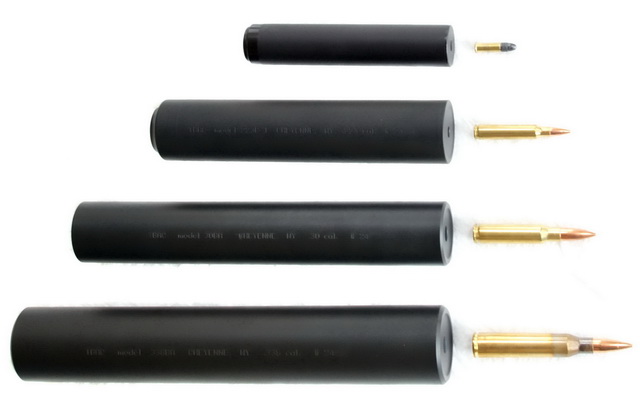