A unique objective of the PSR program was to procure a system that would allow for rapid barrel changes in the field, including conversion to fire the smaller .300WM and .308 calibers using the same chassis and optic. The precision specification was already quite demanding — a consistent vertical spread of no more than 1MOA over a statistically significant number of trials. Constructing a system in which a barrel could be removed from the action in the field and then returned to the same zero may have previously be unthinkable.

It turns out plenty of civilian shooters were just as interested in owning a multi-caliber precision rifle. Shown here are three that were designed for the PSR program and made available for sale to the civilian market. 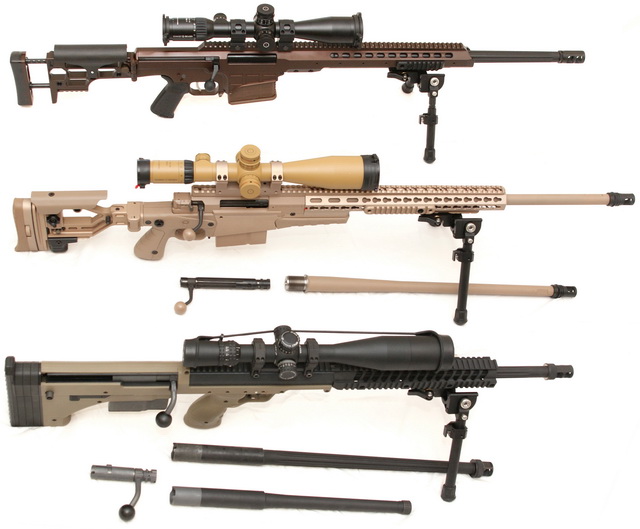 On top is the Barrett MRAD. Initially offered only in .338LM for $6000, Barrett just brought its $1500 conversion kits (bolts, barrels, and magazines) to the market.

In the middle is Accuracy International’s PSR, currently sold only as a complete kit with all three calibers for $17000.

Bottom is the bullpup Desert Tactical Arms SRS, the bargain of the group at $3000 for the chassis and roughly $1500 per caliber kit. We previously reviewed the DTA SRS. Of the multi-caliber PSRs it currently seems to have the greatest market penetration. It is also available in the widest array of calibers, and even has third parties manufacturing conversion barrels.

The PSR contract was finally awarded this March to Remington’s “Modular Sniper Rifle,” which will probably not be available for civilian purchase until government demand has been satisfied.