After I bought a Noveske upper I decided it deserved its own lower, and in order to get exactly what I wanted I chose to build this one myself. The finished lower shown above started out as this $700 collection of parts: 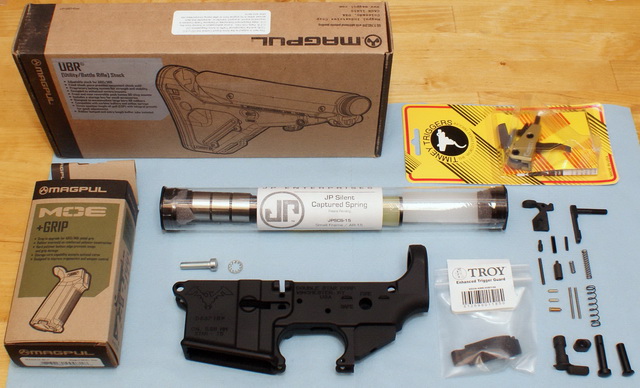 Going roughly clockwise from the bottom these are:

The actual assembly took me perhaps two hours, and that’s without any special tools that can make inserting some of those springs and pins a lot easier. There are several decent online guides for the process.

The stripped lower is the only serialized part, and so the only thing that has to be purchased through a licensed gun dealer. (It’s kind of funny doing the paperwork to buy a “rifle” and walking out with nothing but a small block of metal.) I was lucky to have ordered this lower last November just before the double-bubble in demand that is only now subsiding. The brand doesn’t really matter: A standard AR-15 lower is machined from forged aluminum and is hard anodized black. There are only a few variations that one needs to be aware of to ensure parts compatibility: trigger pin and buffer tube size (military or commercial), and safety throw (standard or short).

The biggest splurge on this lower is the UBR stock: It’s Magpul’s top-of-the-line telescoping stock, and unlike any other it is rock solid with zero movement or rattle at any extension. I also paid up for the JP Enterprises Silent recoil spring system because I was building this lower for an often-suppressed upper, and even when I shoot unsuppressed I usually wear electronic ear muffs. I find the rasping, twanging noise that accompanies many AR-15 recoil springs’ cycles annoying. Not all of them make it — for some reason the spring on my SR-556 is silent — but I didn’t want to leave this one to luck. The other advantage of the self-contained JP system is that it doesn’t require a retainer detent: I omitted that from the receiver so the one-piece buffer/spring assembly can easily be installed and removed.

I’m a stickler for triggers — a light, crisp trigger is essential to wringing all of the accuracy potential out of a gun. I have and like a Chip McCormick drop-in, but I prefer the retention mechanism on this otherwise functionally indistinguishable Timney unit: The CMC trigger requires special pins that secure with external C-clips. The Timney uses the standard trigger-group pins and is retained by tightening screws that press the body up against the pins.

There is a diverse market in grips for AR-15s. Since I have large hands I go for larger grips. I also stick to grips with an integral backstrap to avoid any pinching in the otherwise exposed joint between the grip and the receiver’s back radius where the firing hand web anchors itself. I like the tacky rubber on my Hogue grip, but it doesn’t have a backstrap and, like comparable Ergo grips I have tried, its core has some flexibility that I don’t want when I have to move the rifle by the grip. The MOE+ delivers that soft rubber finish with the rigidity I was looking for. I would like it more if it had the stippled style of the Hogue instead of the front and rear grooves that work better on hard plastic.