I acquired the T3 receiver and trigger assembly, shown below, for $500. The beautifully machined bolt and receiver are proprietary, but everything else is compatible with the broad market of Ruger 10/22 accessories. The trigger assembly features a crisp 2.5-pound trigger, and is all metal except for the trigger itself and the convenient extended magazine release lever in front of the trigger guard. 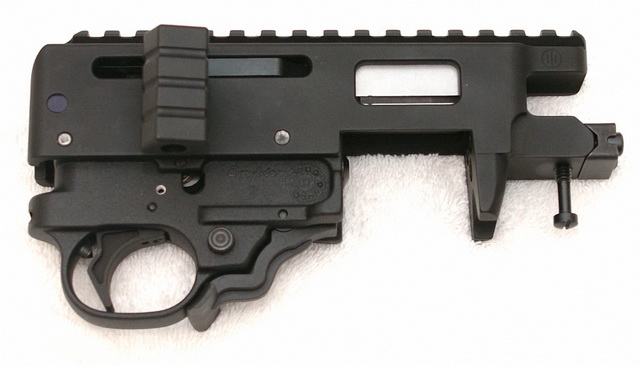 I installed the receiver in a Hogue stock. The 18″ barrel came muzzle-threaded from EABCO and button rifled with a 1:9 twist rate: sufficient to stabilize subsonic 60gr Aguila .22 bullets. (The standard .22LR twist rate is 1:16.) Those two components brought total cost for the gun to $750, excluding a scope.

My goal with this rifle was to make it as quiet and accurate as possible. As I have previously explained, “quiet” firearms are created by:

I already had a registered Gem-Tech Outback II — a light and competent .22 suppressor. There are plenty of subsonic factory loads for .22LR, including most target ammunition, so the second requirement was easy. To ensure the third requirement was met I knew I wanted a manual action, since especially with the shorter cases of 60gr .22LR bullets there is a risk an autoloader will extract the case while there is still enough pressure in the barrel to create an audible pop out of the chamber. (Note: I have since read that with the right combination of bolt handles and recoil springs a semi-auto 10/22 can be kept closed long enough that there’s no pop from the ejection cycle. Given that $500 can also buy a complete Volquartsen or KIDD receiver/bolt/trigger assembly I’m inclined to try making that work next time.)

As for accuracy: In principle manual actions are also the most accurate, since the gun doesn’t have to do anything to cycle the action before the bullet leaves the muzzle — things that could introduce variance from shot to shot. In practice, however, it seems that especially blow-back autoloaders in small calibers like .22LR can be made as accurate as all but the most finely tuned manual loaders. Nevertheless, I decided to remove that variable and build a gun with a manual action.

The most common manual action rifle is the bolt-action. (Lever- and pump-actions are also not uncommon, but I’m not aware of any that allow such easy customization as bolt guns, and since I wanted a precision barrel with an unusual twist rate I knew I would have to assemble my own gun.) I have a number of bolt-guns, including a .22, and it always struck me as overkill — like using a sledge hammer to push a thumbtack — to be using a camming bolt (or “turn-bolt”) on such a low-pressure round. So I started looking for “toggle” actions.

Straight-pull bolt actions are rarely seen outside of olympic biathlon shooting. They offer a slight speed advantage over turn-bolts, which require the shooter to rotate the bolt at least 60 degrees in and out of battery before it can be pushed and pulled to feed and extract a cartridge from the chamber. But toggles and straight-pulls do require a more complicated mechanism, so perhaps that explains their near-total absence from any niche where bolt actions aren’t required and fractions of a second don’t matter. (There are a few notable exceptions: The Blaser R93 and the Merkel RX Helix are high-end centerfire rifles with straight-pull actions.)

All I could find for toggle .22’s were Russian Izhmash rifles (customized for biathlon and running upwards of $1500) and a line by Browning called the T-Bolt (but not readily equipped with the fast-twist barrel I needed). Then PWS came out with their T3 rifle patterned on the Ruger 10/22, so I jumped on it.

To date I have only tested this gun with Aguila subsonic ammunition — both 40gr and 60gr. When I first assembled it I had frequent failures to extract. PWS techs instructed me to file down the extraction groove of the barrel and that solved that problem. Then I had frequent failures to eject: The extractors would just drop the case before it hit the ejector, and even if it made it to the ejector more often than not it would fail to be kicked out the ejection port. This was a trickier problem. After some research the PWS techs concluded that the rim on Aguila 60gr .22LR is .269″ where a standard 22LR is .274″. They machined a primary extractor to account for the difference, but installing it didn’t completely eliminate the problem.

What did make things run reliably was to cycle the bolt quickly (which one should do anyway). This helped mitigate the other quirk of this toggle action, which is that the bolt runs into resistance at the rear of the stroke where it has to cock the trigger. Unfortunately, because the toggle and stroke run so far to the rear you have to give up your firing grip to cycle this, so it’s not like a true Olympic toggle gun. (This is probably inevitable for a gun that maintains compatibility with the Ruger 10/22 platform.) But if you just tug on it with two fingers and follow through to the rear of the stroke it does run back and forth smoothly.