Precision shooters know that keeping bullet speeds out of the transonic region preserves accuracy. The pressure dynamics around the sound barrier can upset a ballistically efficient bullet on its way to the target.

It turns out that the round nose and stubby heel of a typical .22LR bullet make it remarkably aerodynamic at subsonic speeds. Consequently, match-grade .22LR ammunition is typically designed to leave a rifle barrel under 1000fps.

Competitive rimfire shooters aren’t the only ones who have discovered advantages to subsonic ammunition. Anyone who fires a well suppressed gun will note that even if the muzzle blast is fully contained in the baffles of a silencer a supersonic bullet makes a significant amount of noise of its own: As it travels down range the supersonic pressure waves in its wake produce a “sonic crack.” Since .22LR cans are so light, cheap, and efficient, there are a lot of suppressor owners opting for subsonic ammunition to keep shooting sessions as quiet as possible.

Anyone who has pulled a subsonic .22 bullet has probably been surprised at how much empty space is in the case. It takes less than one grain of powder to propel the standard 40gr .22 lead bullet to the sound barrier. With all that extra room in the cartridge, why not add some more mass to the bullet? After all, holding all else equal, mass is your ballistic friend: It increases ballistic coefficient, which increases a bullet’s effective range by helping it retain velocity and resist atmospheric disturbances. Extra mass at the same speed also increases energy, which enhances terminal ballistics. 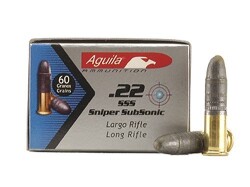 At some point you’re bound to notice a peculiar offering in the .22 marketplace: Silver boxes of Aguila-brand subsonic .22LR ammunition with some odd-looking 60gr bullets. Based on all of the preceding observations, you might justifiably exclaim, “Ah ha! There’s a great idea! I’ll put those in my rifle and enjoy all of the benefits of subsonic shooting for pennies a round, but with improved ballistics!”

And you would be right, except for one problem: Virtually every .22LR barrel is made with 1:16” rifling, and that is not adequate to reliably stabilize those longer 60gr lead bullets. In fact, I have looked long and hard to find anyone who makes a .22LR barrel with faster rifling that is also threaded to accept a suppressor. (The closest you can come is to buy an aftermarket specialty barrel from a place like Green Mountain, and then pay another $100 to get someone else to thread its muzzle. Or buy a .22LR conversion kit for a .223 rifle, many of which have 1:9 twist threaded barrels.)

Do some more research and you will also conclude that Aguila does not enjoy the most stellar reputation in rimfire ammunition. And yet they are the only company that makes .22LR bullets heavier than 50gr (and there are only a tiny number of other specialty loads heavier than the standard 40gr).

.22LR is by far the most popular consumer cartridge. Every .22LR shooter with a silencer, and many without, would love to be able to buy reliable and accurate 60gr+ bullets, as well as threaded barrels with sufficient twist rates to stabilize them.

So my open question to the firearms industry is: Where are the reputable bullet manufacturers selling cases of plinking, varmint, and match-grade 60gr .22LR ammunition? And where in the vast marketplace of .22LR guns and parts are the 1:12 twist .22LR barrels with threaded muzzles to shoot those bullets?