Today I’m going to show a project that exploited the Chronos 1.4 at high image resolutions and at the lower end of its temporal resolution (i.e., frame-rate): What does handgun recoil look like, and how can a shooter control it?

I took a rusty shooter to the range with his Sig P239 chambered in .357SIG. This is an excellent concealed carry gun shooting arguably the ideal cartridge for defensive handguns. However, since the fully-loaded gun weighs only two pounds it has somewhat snappy recoil which requires training and practice to handle well.

Stepping through the video frames we can see that this pistol’s “lock time” (the delay from when the trigger is pulled until the hammer hits the primer) is 5ms. Also, from the moment the trigger is pulled, it takes 18ms for the slide to cycle to the rear, and 63ms to return to battery.

We filmed the shooter’s first few shots. He had forgotten some pistol fundamentals, including: proper grip, not anticipating the recoil, and following through each shot. (Granted, most of these problems can be detected or assumed even without high-speed video.) After retraining we filmed a few more shots. The improvement was remarkable. Beginning the refresher the shooter experienced muzzle flip of 40 degrees and consistently took over 60ms to halt the recoil of the gun. This composite overlaying the moment of discharge with peak recoil shows the slide already returned to battery by the time the shooter has stopped the recoil: 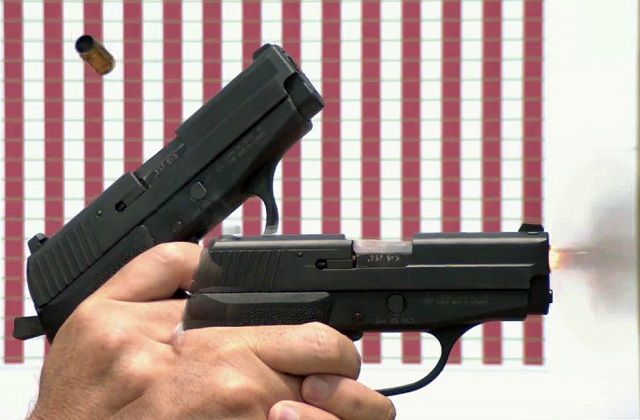 After retraining, the shooter was able to keep muzzle flip under 20 degrees and stop the recoil in under 40ms. (This was accompanied, of course, by faster and more accurate shooting.) 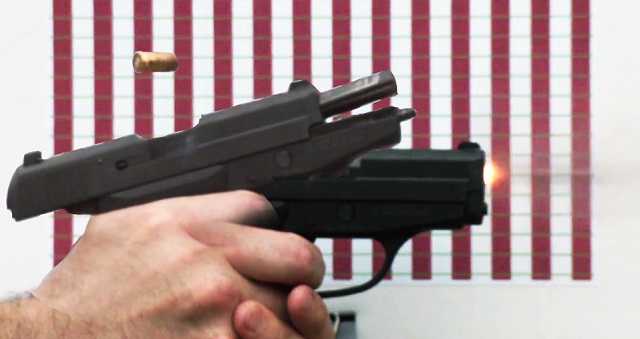