What does a bullet do when it hits something? We have done extensive ballistic testing on water and will detail our results over the next few posts.

Why water? For one thing it’s a good simulant of soft animal tissue. Real animals may be the targets of any study, but given their bone and organ distribution it can be hard to get consistent results. For scientific purposes the standard medium for studying terminal ballistics has been calibrated gelatin, usually 10-20%. This allows for careful analysis of penetration and wound channels, but it is also a pain to prepare. If you are just interested in what happens to the bullet it turns out that a large tank of water has the same effect on projectiles and allows for easy recovery.

It was during water testing that we were first struck by the behavior of standard rifle bullets at subsonic velocities: They don’t deform at all. You can almost just polish out the rifling marks and load them again: 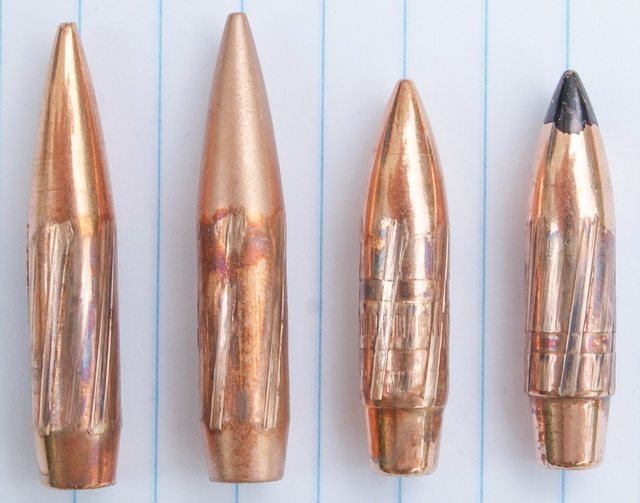 It takes high-speed video to see that even though they don’t expand these long rounds destabilize almost immediately on entering a body (of water, or otherwise). The following videos were provided by Aimed Research (which maintains a fascinating YouTube channel):

Two other videos are here and here.

For reference: At supersonic impact velocities hunting bullets expand. Following are four examples. The left-most is a solid copper alloy. The others are lead-core bullets with various expanding and bonding mechanisms designed to retain enough mass in the copper jacket to penetrate while dissipating some lead in the target shortly after impact.

“Bullet gel tests” are easy to find online if you want to see exactly how and when a particular bullet expands. Here is a striking microsecond image from one of Aimed Research’s gel tests: 2 thoughts on “Shooting Bullets Into Water – Part I”