Summary: The most efficient baffle suppressors have internal asymmetries that can affect the flight path, and hence point of impact (POI) of bullets fired through them. Asymmetric suppressors can be “sighted in” to find the index that produces the most benign POI shift.

My first full-power rifle suppressor was Gemtech’s M4-02. I was baffled by its persistent tendency to not only double the size of my groups but also to drop them more than 3MOA from zero.

I have since learned that changes in point-of-impact (POI) when attaching a silencer to a rifle are considered normal. My first assumption was that POI shift was primarily due to changes in the barrel’s harmonics. So I spent a day trying to work up a load on my precision .223 bolt gun that would give me the same POI as my unsuppressed groups. I found loads that gave better groups with the suppressor, but they were still consistently 3MOA low. After some discussion with experts I concluded that harmonic changes are probably not the dominant source of POI shift, especially with thicker barrels.

Then I heard about AAC’s M.I.T.E.R. (Multi-Indexing for Targeting at Extended Range) System: A patent-pending suppressor and mount that allows the user to quickly change the index of the can in increments of 1/5th of a turn. AAC’s manual for the SPR silencer, which uses the MITER mount, has a helpful chart showing how rotating the can’s position can change the POI of groups. A review of this silencer even noted that POI shifts exceed 3MOA in some positions. 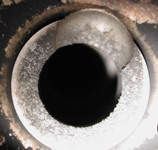 Why would changing the suppressor’s index reliably change the point of impact? It turns out that the most efficient baffle suppressor designs require asymmetries in the baffles to encourage the muzzle blast to redirect itself away from the bore line and into the baffles, instead of straight out the end of the can. If you look at the first “blast baffle” in such a can you will often see something like the divot shown in this photo. It is well known that the bullet isn’t the first thing out of the muzzle: The bullet pushes a column of air ahead of it, and as it leaves the muzzle the bullet is even overtaken briefly by the high pressure propellant gases behind it. As you sight in a silencer with an asymmetric blast baffle you will probably notice that the orientation of the divot correlates with the POI shift. So it appears that the divot is causing some of the propellant to nudge the bullet in a consistent direction.

How can you “sight in” your asymmetric suppressor? Essentially you want to shoot groups as you slowly change the orientation of the can around a full 360 degrees. But you should never shoot a silencer that isn’t fully tightened down. For sighting in my 1/2″-28TPI suppressors I bought this bag of very thin steel washers to allow me to shim it out roughly a fifth of a turn at a time. After zeroing I shot five-shot groups at each orientation, using two different types of bullets: flat-based 55gr, and boat-tailed 69gr. The resulting group centers and sizes are depicted in the following chart (which links to a spreadsheet with the raw data). 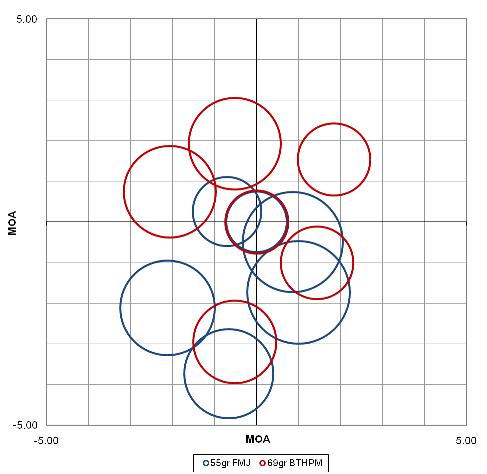 Obviously with my heavy barrel the orientation of this silencer is a critical factor in POI shift. Adding two shims before screwing on the can gives me groups that are only half an MOA from the bare barrel’s zero, with impacts just a little high. (With no shims this can produces the 3-4MOA drop shown on the chart.)

Note that you should not be able to “sight in” silencers with symmetric baffles because those internals look the same no matter how they’re rotated. Symmetric designs can be more intrinsically accurate, but there are some tradeoffs: Symmetry reduces their sound reduction efficiency by something like 7dB versus a comparable asymmetric can. The lower efficiency can be offset by increasing the silencer’s total volume. The higher accuracy may also allow for a tighter bore to be safely used without increasing the risk of bullet baffle strikes. (Phil Dater of Gem-Tech has observed that shrinking the silencer’s bore can increase efficiency by about 1dB for each 5/1000″ in diameter reduction.)

Of course, with symmetric baffles you’re pretty much stuck with whatever POI shift you find. For example, when I hang the 22oz AAC Cyclone off the end of my 24″ heavy barrel .308 it drops my POI about 2MOA. Because the Cyclone has symmetric baffles the POI shift is the same regardless of the silencer’s orientation (which I verified during testing). In this case the drop in POI is probably mostly due to the weight of the suppressor actually bending the muzzle downward. Because it’s consistent and only affects the elevation it’s not a big deal to just adjust my scope’s zero when I put the suppressor on. However with an asymmetric silencer I could, in principle, play with its orientation to find a net POI shift that is more to my liking.