When I first took my .223 suppressor (Gemtech M4-02) to the range with a chronograph I was surprised, on reviewing the data, to find that it was doubling the standard deviation of muzzle velocity. Baffle suppressors are known to increase muzzle velocity in an effect known as “freebore boost.” Basically they extend the barrel length, which gives the propellant extra time to accelerate the bullet. So I was expecting to see higher velocities, but not higher variance: When I added the can to the end of the barrel average velocity went up about 50fps, but the standard deviation of velocity also went from about 22fps to 45fps!

When it comes to marksmanship anything that increases variance reduces accuracy. Are suppressors inherently bad for accuracy? After some correspondence on the SilencerTalk.com forum I decided to run a controlled experiment. I went back to the range with a stopwatch and a Mastercool infrared thermometer. 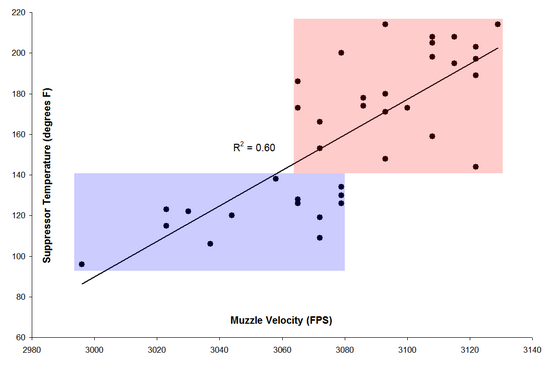 What I found is that muzzle velocity is strongly correlated (R2 = .60) with suppressor temperature. I.e., once your can is hot your bullets will go faster. Several people hypothesized that this is simply because hot air is less dense, so it offers less resistance to the accelerating bullet. Another hypothesis is that the propellant burns more completely or more rapidly in the superheated air it encounters in the baffles, which increases the rate at which it can propel the bullet.

How hot does a suppressor get? For this experiment I shot Federal XM193 5.56mm (55gr Boat-tail ball) ammunition. On average each shot heated the 16 ounce suppressor by 10 degrees F. During one phase of the experiment I shot 30 rounds in under 90 seconds, which raised the suppressor temperature from 110 to 410 degrees F. During that extended string of shots my standard deviation was only 19fps — which is about the same variance I see when shooting without a suppressor. It took ten minutes for the suppressor to cool back down below 150F. (Ambient conditions were 62F, 25% humidity. Surface temperature in the sun was 88F. Winds were 10-15mph.)

If I may summarize liberally from the results of the experiment: A baffle suppressor essentially has two states, which we could call “Hot” and “Cold.” A suppressor is Hot when either (1) shots are fired in quick succession or (2) its temperature is above about 150F. In the first case I imagine that the baffles are still full of hot propellant vapor; in the second case the can is radiating enough heat to keep ambient air at this elevated temperature. A suppressor goes Cold as soon as ambient air seeps back in.