I have enjoyed my Mazda 6 Sport wagon, but early on one thing that bothered me was its tendency to understeer — to scrub and squeal in tight turns. Recently I mentioned this to a friend who does amateur racing and after an extended discussion of suspension geometry I concluded that I needed a custom wheel alignment.

Cars with low-profile tires are even more sensitive to alignment, because there’s less sidewall to flex and compensate for suboptimal orientations between the tire’s tread and the car’s track. Factory specifications for alignment are quite loose, and even those broad ranges are often exceeded once a car is broken in. What surprised me most, given Mazda’s sporting orientation, is that their 6 series suspension does not allow for adjustments in front wheel camber, which is the most important alignment factor in cornering performance.

Fortunately there is enough demand to correct this shortcoming that SPC has produced after-market upper ball joints (SKU 67115 — $165 per pair from IAPdirect.com) that allow several degrees of camber adjustment on each wheel.

Serious drivers and mechanics emphasize that it’s worth paying extra for this sort of work to be done by competent technicians. My expert directed me to a local shop that caters to racers that he knew would correctly install the ball joints and perform a precision alignment, and he said it was well worth the $470 they wanted for the work.

I requested the following specs:

My goal with these specs was three-fold:

They test-drove and measured my alignment before doing the work and noted that the alignment was indeed quite bad overall. For example, my rear tires were actually toed out by 1mm! They didn’t put it on their alignment rack until after they installed the ball joints, so we’ll never know how bad the front measurements were before, but by the time they were done they had almost exactly matched my alignment specs, as shown in the chart below.

Driving away from the shop it was almost like a different car: It tracks straight, the steering is lighter, and it corners like it’s on rails. 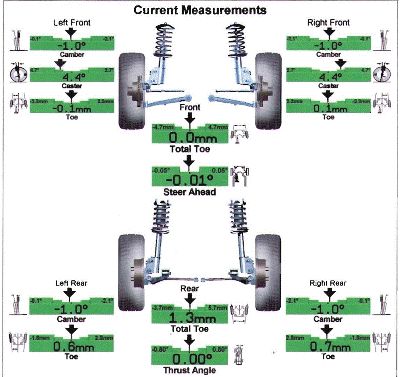