Not long ago the knockout myth was a staple of action shows: Heroes could drop victims cold with a single karate-chop to the back of the head, then carry on with no concern they would regain consciousness before the end of the scene. Fortunately, increasing awareness of the seriousness of brain injury has relegated this plot device to farces. In reality any blow that knocks somebody out for longer than a few minutes is likely to cause extended and often permanent brain damage.

But Hollywood has replaced the knockout blow with an even more absurd gag: the stun gun, which with a single zap appears to drop victims to the ground and render them unconscious long enough to be moved and tied up. The reality is that electroshock weapons are far less reliable and effective, but also very interesting. 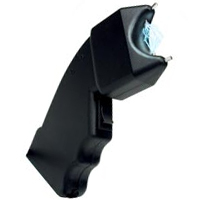 Basic electroshock weapons are often misleadingly called stun guns. They create a high voltage charge between two electrodes. When pressed against a conductor like human skin low current flows through the conductor between the electrodes. The current triggers pain receptors, so the victim feels extreme pain, but the sensation is localized to the area between the electrodes. The shock may be startling, but its effects are limited to the individual’s reaction to pain. A typical person will recoil from the shock and try to avoid continued contact. An angry person might just get more angry.

In order to cause more dramatic reactions electric current needs to travel through muscle. Taser International pioneered the development and publicity of electroshock weapons that can cause major muscle groups to involuntarily seize up, usually resulting in victims falling to the ground, incapacitated. There is some fascinating science behind the exact methods Taser uses to achieve these results without endangering a victim’s heart, worth reading in this feature by the IEEE. 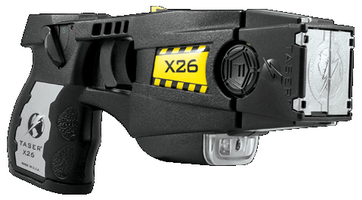 But Tasers are not magic wands: A lot has to go right for them to work effectively.

First, the electroshock effect only lasts as long as the current runs: As soon as the current stops or the circuit is broken the victim suffers no lingering impairment. To maintain contact Taser electrodes are actually hypodermic barbs. (This fact surprised me, especially since the barbs often punch through clothing and draw blood. A Taser engineer I talked to noted that more than a million people have been voluntarily “tased” and there have been no reports of associated infections. He mused that the electric current may have a sterilizing effect, though there has been no scientific study on that question.)

Electrodes have to span core muscle groups to cause incapacitation. If the barbs are too close to each other their current path, and hence their effects, will be localized. The electroshock effect also depends on where the electrodes hit: Areas with few muscles and nerves, like the lower rib cage, do not reliably incapacitate. However Taser electrodes are also barbed on their sides so that a victim attempting to pull them out to stop the pain will likely complete a highly incapacitating circuit leading from his hand through his chest to the other electrode.

Because the electrodes need some separation Tasers are ideally discharged from a short distance. Two electrodes are propelled from the weapons with an 8 degree vertical spread. In less ideal conditions one electrode can miss, in which case the victim gets no shock. Or the victim could be too close for the electrodes to spread adequately. In those circumstances Taser trains users to “drive” the weapon into contact with the victim: in addition to the fired electrodes a Taser cartridge contains contact electrodes, and its circuitry can detect which one to energize to complete the largest circuit on the victim.

It is possible to “armor” against Tasers by wearing conductive clothing or spray-on coatings. However if you’re armoring yourself against Tasers you should consider that the next steps in the escalation of force are impact weapons or firearms, which will more likely cause serious injury or death. (This is why Tasers are so popular with law enforcement: In many scenarios they can cut short altercations that would otherwise require officers to tackle or grapple subjects, resulting in frequent injuries to both parties. Although that benefit has been tarnished by disturbingly many incidents in which officers abuse Tasers to inflict pain or assert power in non-violent confrontations.)

So, clearly Hollywood is getting it wrong when they depict simple stun guns incapacitating people, or advanced electroshock weapons like Tasers knocking people out. Please stop.