My first .22LR pistol was a Browning Buck Mark, which I amended with a threaded Tactical Solutions barrel so I could shoot with my Gemtech Outback suppressor. That works well, but I’ve since bought into the philosophy that one should “practice with what you’ll use,” and I’m not carrying my Buck Mark or taking it to any competitions. I’ve also mentioned the importance of practicing with semi-auto guns to acquire and maintain proficiency in dealing with their various failure modes. Since the semi-auto pistol I use and advocate more than any other is a Glock I decided to get a .22 conversion.

Reasons to get a .22LR conversion for your semi-auto pistol:

Advantage Arms has had a Glock .22 conversion kit on the market for years. But they never offered a threaded barrel, and for me the ability to shoot suppressed in my back yard was a big draw. This year Tactical Solutions came out with a conversion kit that is available with a threaded barrel, so that’s the one I bought. I paid $350 for the kit, but what they did not make clear (at least when I bought it) is that their slide does not come with sights. So add $40-90 for another set of sights!

This picture shows my original Glock 17 slide. The .22 conversion is just a replacement slide, shown underneath without and with my suppressor attached. Weight and balance of this conversion are kept pretty close to the original: 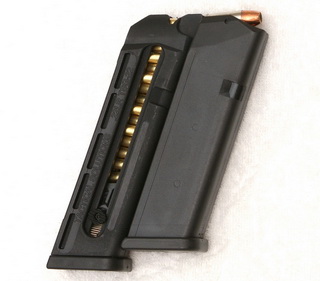 The other piece of the .22 conversion is a magazine. A fully loaded G17 mag weighs about 10 ounces. The TSG magazines can hold up to 15 rounds, but they weigh only 4 ounces loaded and protrude from the bottom of the grip by about half an inch. The magazines are one of the big shortcomings of this conversion kit, and not just due to their careless proportions: I bought an extra mag, and even after sending everything back to Tactical Solutions and shooting at least 1000 rounds through it the conversion will stovepipe virtually every round it tries to feed from a mag containing more than 10 rounds.

The other big drawback to this conversion, which it shares with seemingly every other .22 semi-auto on the market, is that full take-down for cleaning requires undoing screws. In this case, two tiny screws that are very difficult to reseat and very prone to galling. You can’t even fully remove the barrel without doing a complete take-down. And as with anything that eats .22 ammo, things get very dirty. But you can probably clean enough to keep it running just by scrubbing the feed ramp, bore, breech face, and extractor.

The final serious problem with this conversion, which is common to all other rimfire guns, is that dry firing can eventually break it: Rimfire rounds “fire” when the firing pin crushes the case rim (which contains the primer compound) against the chamber rim. Dry-firing causes the firing pin to directly strike the chamber rim, gradually denting the “anvil” needed to support a round’s rim during firing. In theory perhaps the firing pin could be made of a metal sufficiently soft relative to the chamber that it couldn’t dent it no matter how many times it hit. But in practice I was able to observe cratering beginning after just a handful of dry strikes. This is particularly problematic because the Glock is designed to be dry-fired before take-down. If you’re careful it is possible to dry-fire for disassembly while holding the slide slightly off the barrel so the firing-pin doesn’t hit it. But even if you are diligent in that you will probably inadvertently dry-fire many times during shooting because it doesn’t reliably lock the slide back on an empty magazine. 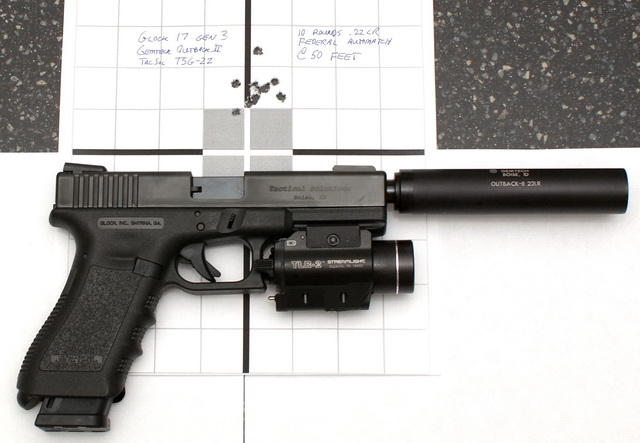 Bearing these issues in mind, I was reasonably satisfied overall with the conversion kit. As this photo shows the gun is capable of more accuracy than most people can wring from open sights on a standard-length pistol. Tactical Solutions recommends shooting either Federal AutoMatch or CCI Mini-Mag HV ammo (both of which shoot about 1050fps with a suppressor, which is only marginally subsonic but still quiet enough to not bother the neighbors) for maximum reliability. Granted, “reliability” for a .22 semi-auto is relative: Even without loading more than 10 rounds I count myself lucky if I make it through a magazine or two of AutoMatch without a failure to feed. But that’s part of the practice, and with .22s I can afford to practice a lot more.