This is a police package.  I managed to find mine at gunbroker.com for $1450 (plus $25 shipping and $25 FFL transfer), though that was an exceptional deal.  They are routinely listed around $1700, and local dealers stock them for $1900.

If you’re only going to get one large-caliber target rifle, it should be a .308.  This is a time-tested NATO cartridge, still used by military and police snipers around the world.  (The only reason to step up to the other standards, the .338 Lapua and the .50 BMG, is if you’re shooting over 1000 yards or against light armor.  But you’ll pay handsomely for the privilege.)  Because it’s such a standard cartridge, you can pick up quality .308 in bulk for under $.50/round at manufacturers like Georgia Arms (see Ammunition section below).

I believe this is the best out-of-the-box bolt gun you can buy: It has the best factory trigger on the market (Savage’s AccuTrigger).  It comes mounted with the gold standard in optics: the Leupold Mark-IV, in 4.5-10x40mm with a mil-dot reticle.  Rounding it out are a sturdy Harris bipod and impressively rugged rolling, waterproof Storm case.  It comes ready for crisp, sub-MOA shooting without any tuning or trips to a gunsmith.

After the Democrats won elections in November 2006

, there seemed to be a slight shortage of .308 ammunition.  (May also have been due to a lag in the market adjusting to rising commodities prices.)  Best deal I could find at the time was at Georgia Arms, where I picked up 500 rounds of factory remanufactured 150gr FMJ for $180 and 500 rounds of 168gr match-grade Sierra BTHP for $245.  All of their ammunition I have tried is top quality, and if you order enough it ships for free!  I chronographed the 150gr bullets at 2950fps as I was breaking in my barrel.  I then shot the 5-round group shown here at 50 yards with the 168gr match bullets, which chronographed about 2730fps.

This is a powerful gun. Both of these rounds penetrate up to 1/2″ of steel. Here you can see the clean entry and exit holes through a 5/16″ plate. Below are the craters produced shooting into a 3/4″ steel plate from 50 feet.

I paid $42 to get 20 rounds of “Starburst” incendiary ammunition from Ammunition To Go.  I chronographed a few of these at just over 3000fps, from which I infer they are 147gr bullets.  These are designed to explode on impact with a hard target.  (Though even after igniting, they will still penetrate 3/8″ steel, so I suggest shooting against a rock or something you don’t mind seriously denting or puncturing.)  I couldn’t measure how hot they burn, but the explosion itself is exciting, as you can see from these photos I took in broad daylight (for scale, that’s a vertical 2×4 to the left of the explosion): 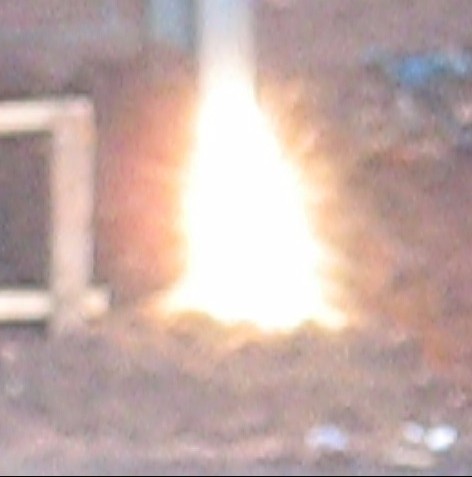 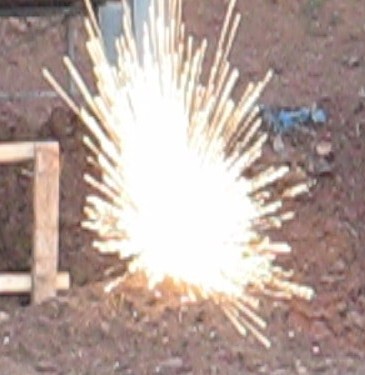