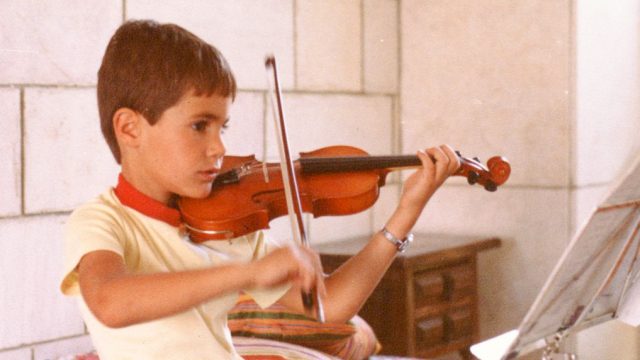 When I was four years old my parents asked me if I wanted to learn to play the violin. I didn’t have a lot going on at the time so I said yes.

I was accepted as a student by Mrs. Primrose, a Japanese teacher of the Suzuki violin method (and wife of famous violist William Primrose). I discovered that the violin is a difficult and awkward instrument. Learning it requires patient practice, and patience was not one of my early character traits. (A fellow student was Jenny Oaks, who has made a career as a violinist. Mrs. Primrose would often chastise me, “David: Why don’t you practice more, like Jenny?”)

What I lacked in patience I abounded with in obstinance. I was first born and my poor mother did not realize what a constant and pitched battle it would be to get me to practice. She was gifted with perseverance that somehow kept me on the violin for the years until I reached a level at which it became interesting enough for me to continue studying with minimal goading. (She did, however, learn from the process: My younger siblings were started on musical instruments at increasingly later ages, and the last three got to start with piano, which has an easier learning curve. You’re welcome guys.)

Beginning the Suzuki violin method is excruciating for a young western boy. The first few weeks consist of nothing but finger exercises with a pencil, before ever touching the bow. Then there were what seemed like months of bowing “taca-taca stop-stop” on open strings before I was allowed to try placing fingers on taped marks to play other notes. There is no “Karate Kid” moment when the student discovers that all of the detached exercises have laid the foundation for a rewarding performance. Just months of tedious practice and virtually nothing to show for it. That’s what learning the violin felt like.

One thought on “Beginning Violin”