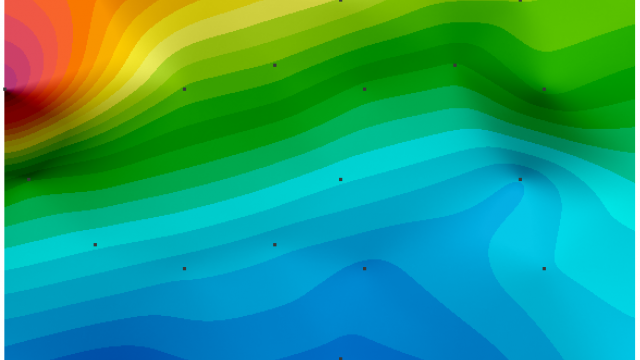 Today I wanted to convert 26 height measurements I made into a topographic map. Complicating the project was the fact that my data were not spaced at regular cartesian grid points, but rather compass-style at 30-degree intervals from a series of reference points. Within a few minutes of searching online I found this shareware program from 2004 that could take a plaintext file of the xyz points as an input and interpolate a surface, producing this:

Another great piece of freeware that recently simplified some of my other work is this VBA “Decompiler”: I have been pushing the envelope with Excel, and since Microsoft Office is sloppy with its Visual Basic interpreters one must occasionally purge all VBA code from a workbook and reload it – a kludgy process that was automated by the author of that clever tool. 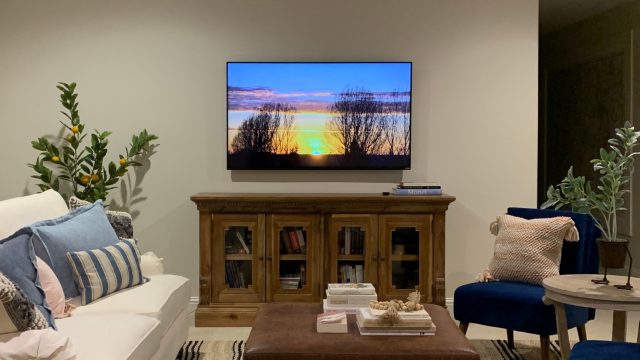 In 2007 I envisioned a future in which building walls and windows are constructed from “sturdy modular panels capable of controlling every phase and frequency of electromagnetic radiation.” Recently I took a small real-world step in that direction by repurposing an old 60″ 1080p LED “smart” TV to fill a space that needed a large piece of art:

With no natural light available, the interior decorator was struggling to find something that made this windowless basement living room “work.” Unlike old-fashioned hanging pictures or mirrors, LED displays don’t depend on ambient light to showcase images. Since they are emissive they also add light to the space. And, of course, the image itself can be changed at the press of a button, or the display “retasked” to its original design function as a smart screen.

Presently mid-range LED panels cost about $25 per square foot, or roughly $3,000 to completely cover the wall in the photo above. So they’re not yet price-competitive with sheetrock and paint, or even high-end wallpaper, but they are on par with tile. Installation? Personally I would rather wire and anchor an array of LED panels to a wall frame than hang and finish sheetrock or wall tile.

Full-surface “SmartWalls” will make more sense in a few years when LED production has shifted from passive LEDs to OLEDs: Because each OLED pixel is itself emissive, OLED sheets don’t require side- or back-lighting and are therefore ultra-thin. Once large-scale OLED fabrication techniques have matured, the installed cost of smart walls will be similar to that of wallpapered drywall.

Here is a collection of my photos sized for 1080 panels that I use on these emissive wall hangings.